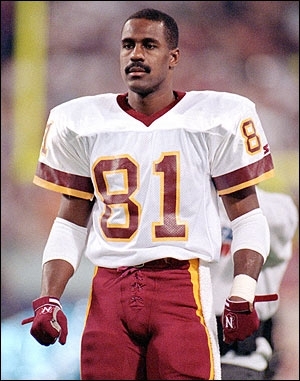 Before they were Super Bowl champions and Pro Football Hall of Fame members, Art Monk and Dave Casper had successful college football careers.

Former UCLA and Ravens offensive tackle Jonathan Ogden is among players and coaches who will be enshrined into the College Football Hall of Fame this year. Click here to more about the Hall’s newest members. Blog

On Tuesday, Monk, who led Syracuse in receiving three times, and Casper, a consensus All-American on Notre Dame‘s 1973 national championship team, were named to the College Football Hall of Fame.

Monk, who starred for three Washington Redskins Super Bowl winners, began his Syracuse career as a running back and shifted to wide receiver. He holds the school record for most receptions in a game with 14, against Navy in 1977.

Casper, who won a pair of Super Bowls with the Oakland Raiders, played his first two seasons in South Bend on the offensive line before moving to tight end. He was a co-captain of the 1973 Fighting Irish team that beat Alabama in the Sugar Bowl and claimed the AP national title.

Quarterbacks Steve Bartkowski of California and Tommy Kramer of Rice were also among the 17 players and coaches announced as part of the Hall of Fame’s Class of 2012. They joined former BYU quarterback and Heisman Trophy winner Ty Detmer, whose inclusion in the Hall was announced Monday.

Bartkowski led all Division I quarterbacks in passing yards in 1974, with 182 completions for 2,580 yards, while Kramer led the nation in total offense in 1976 with 297.5 yards per game. Both went on to successful NFL careers, with Bartkowski starring for the Atlanta Falcons and Kramer for the Minnesota Vikings.

Coaches being enshrined into the Hall of Fame include Phillip Fulmer of Tennessee, Jimmy Johnson of Oklahoma State and Miami and R.C. Slocum of Texas A&M.

Fulmer led the Volunteers to the first-ever BCS Championship Game title in 1998, and Johnson’s Hurricanes went undefeated in the 1986 and 1987 regular seasons and won the 1987 national championship.

Spread the love
2012-05-15
Previous Post: Researchers generate electricity with viruses
Next Post: Kyrie Irving Runs Away with Rookie of the Year