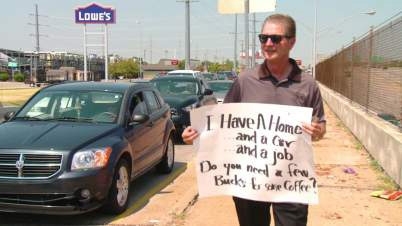 Drivers in Oklahoma City did a double-take this week as they drove by a man standing with a sign at a busy intersection.

Instead of a homeless person asking for a handout, they saw Doug Eaton holding a handwritten sign that read: “I have a home and a car and a job. Do you need a few bucks for some coffee?”

As KFOR-TV reported, Eaton’s offer was a birthday present to himself as he turned 65.

“I asked a bunch of my friends on Facebook what should I do on my sixty-fifth and I got a whole long list of stuff and one of my friends said, ‘Why don’t you do 65 random acts of kindness?,’” he told the station.

So that’s what he did. For 65 minutes, Eaton handed out $5 bills to passersby. It turned into the best birthday gift ever, he said. “It’s just been fantastic. Some people who don’t take the money say, ‘Man, I love what you are doing. I won’t take it but give it to someone who needs it,’” he said.

Some people didn’t know what to make of it. Said one driver used to seeing panhandlers: “I think this is the craziest guy I have ever seen in my life and it’s fantastic! I am enjoying the moment out here.”