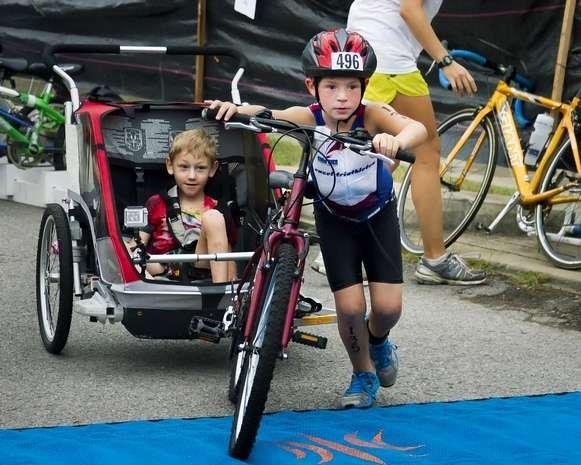 “Team Long Brothers” is what they call themselves and completing triathlons is their game.  Connor Long, 9, is the older one who assists his younger brother Cayden, 8, in their triathlons.  Cayden has cerebral palsy and he is showing the world that this won’t stop him from accomplishing what most can only dream of.

How does it work?  They start in the water where Connor pulls his brother who is in an inflatable harness.    Then they move to the 3 mile bike portion where a cart with Cayden is attached to Connor’s bike.  Cayden is pushed in a cart for the remaining half mile run.  The awesome duo does not complete this amazing task on their own – in each triathlon, they are constantly encouraged by screaming crowds.  They are starting to get worldwide fame.

Their Facebook page has nearly 20,000 followers!  Pretty impressive for two cool kids under the age of 10 🙂  A few weeks ago, the brothers were asked to be the 12th Titan at the NFL football game in Nashville.  They got to hang out with the players, raise the flag, and enjoy front row seats!!  Sounds like these two brothers have a great thing going on.

The two brothers are having a blast!  Check out their expressions as they cross the finish 🙂 -Image Credit: http://www.teamlongbrothers.blogspot.com/

As they say on their website – “Doesn’t Matter Where You Finish As Long As You Cross Together”.  We couldn’t have said it better ourselves.