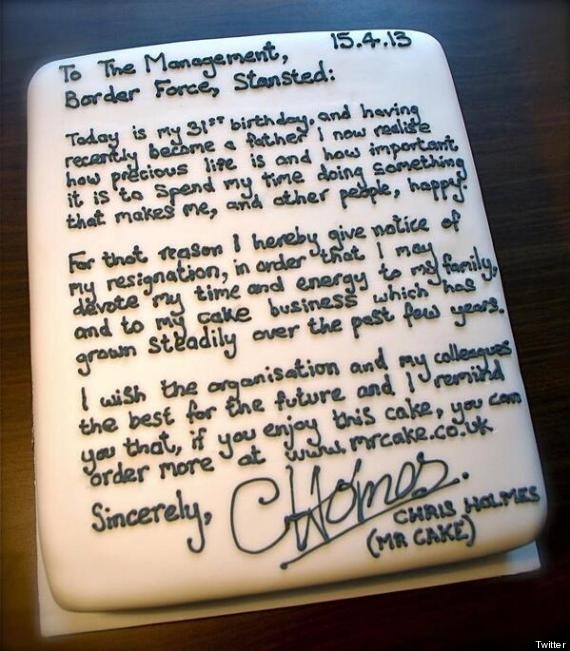 Life is so short.  Kids grow up wanting to be astronauts and archeologists… ok well I wanted to be an archeologist 🙂  Probably because of all those Indiana Jones movies.  It is so special when you see people pursuing those dreams…especially when they pursue them in style!

Meet Chris Holmes, a 31 year old working a boring (I’m guessing) job as a Border Agency Official at London’s Stansted Airport.  His dream job – making cakes!  So after his cake business started growing, on his 31st birthday, he baked a cake for his employer, with his resignation letter written as icing on the cake!

Chris Holmes, aka “Mr. Cake” stated, “… Having set up a cake company, I thought I would leave them with a memento that would be a nice way of remembering me. I had the idea six months ago so I’ve kept it to myself since then.”

In a way, we are all “Chris Holmes” if when are not pursuing our dreams.  Life is short, go after your dreams, and become your own “Mr. Cake” 🙂  You can grab one of his cakes at http://mrcake.co.uk!