By: Jon
In: Random Good News
Tagged: lost and found 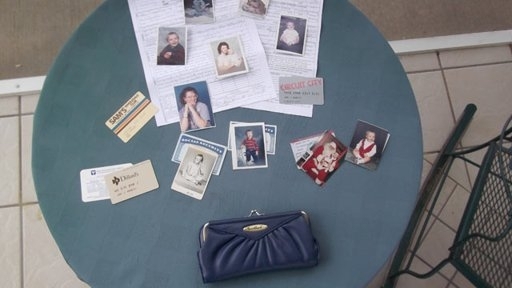 When something is stolen or you lose an item, rarely does it ever make its way back to you.  This is what makes this story so astonishing.
Jeri Cox Chastain received a phone call last week from the police department when they asked her to come to the station to retrieve her blue wallet.  Naturally, she thought this was some sort of joke, but still she made her way down there.
Jeri says she remembers the day 23 years ago when her wallet was stolen from her during her lunch break at work.  She didn’t care about the money that was stolen, but she had a picture of her and her son when he was just 3 months old.  Also in the wallet was his birth certificate, social security card, and her driver’s license.
Remarkably, a maintenance man had recovered the wallet hidden above the ceiling tiles in the women’s restroom of a building only a few miles away from the hospital.  Even though the money was gone, all the pictures and her other valuables were still intact!
“I’m just so glad it’s back with all my memories in it,” said Chastain.
Have a great day, and let the Good News be yours,
Jeremy
Spread the love
2013-05-03
Previous Post: Good World News – April 2013 Newscast
Next Post: Kindergarden teacher donates kidney to student