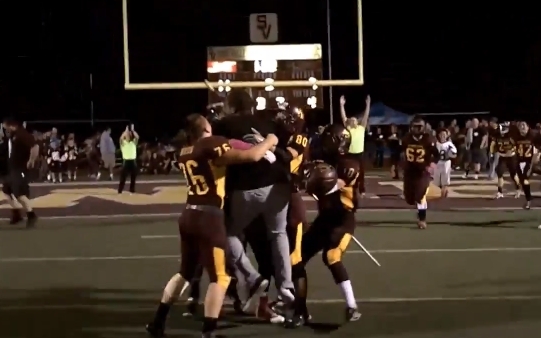 Crosstown rivals Simi Valley High (California) and Royal High featured a field-goal kicking competition during halftime of their game.  What’s the prize you ask…how about a brand new 2014 Chevrolet Camaro valued around $24,000!

Former Simi Valley student Invictus Igwe may have had a leg up on his competition because he was a former placekicker himself, but a 40 yard field goal with the pressure of a brand new car isn’t exactly an easy task!

With his shoe flying 10 yards down the field after he kicked it, the ball hits the upright and goes straight in!  Igwe is then tackled by the team, which I’m sure he didn’t mind after winning a sweet ride.

Igwe actually never drove the car off the lot, because they allowed him to trade in the car for a $20,000 cash prize, which he says he will use to pay off his personal debt.