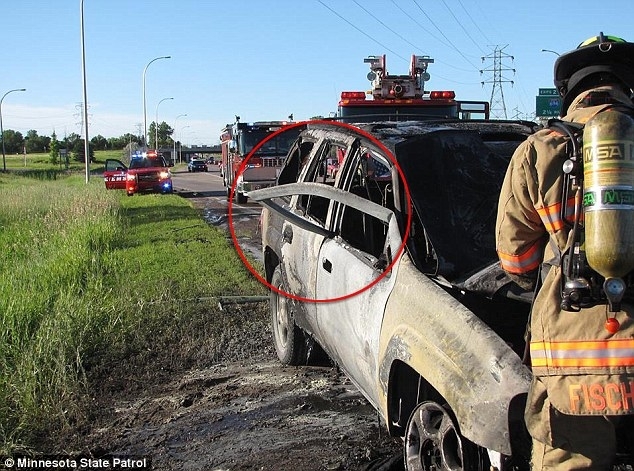 Michael Johannes was driving his 2006 Chevy Trailblazer on a highway in New Brighton, Minnesota

when it caught fire. Michael didn’t realize his car was on fire until Bob Renning, who was driving

ahead of Michael noticed flames from under his car. Renning waved Michael to let him know what

was happening, but it was almost too late. “The taillights started flashing without control, the brakes

stopped working, the speed calculator went to zero, the electronics just got messed up.” Johannes

recalled to ABC News. All of a sudden the car doors locked and Michael couldn’t get them open.

doors open. The smoke was so thick that he couldn’t see anyone in the vehicle. With Superman like

adrenaline running through him, Renning miraculously got his fingers on the door frame, placed his

foot against the door, and pulled as hard as he could. The glass shattered as he bent the door frame

in half! Renning helped Michael escape through the window with only seconds to spare. An Air Force

first sergeant, Renning said he had no idea how he was able to bend the door. “It was a miracle. He was

a husband, he was dad,” Lisa Johannes told ABC News. “He was just telling himself: ‘I had to get out of

there the entire time.'”

Have a great day and let the good news be yours,

Spread the love
2014-07-02
Previous Post: Isaiah Austin’s night to shine
Next Post: Homeless man does what other won’t