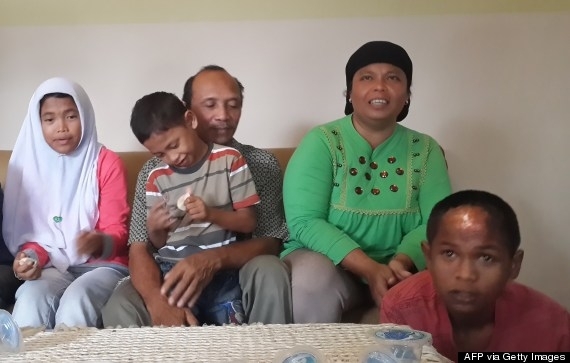 10 years after one of the most deadly tsunami’s that struck the Indian ocean, a family has been reunited.

Septi Rangkuti and his wife Jamaliah thought they had lost their two children when the tsunami hit and the two kids were swept away by the rushing waters.  What they didn’t know was that a fisherman had rescued the brother and sister, but did not know how to locate their families.  Jannah, the daughter was adopted by a family, and the 7-yr old son at the time became an orphan boy who spent his nights on the streets.

An uncle of the family spotted Jannah who 10 years later is now a 14 year old girl in a village nearby.  He thought the girl resembled her, and ended up confirming that it was indeed Jannah.  The family then went on the news trying to find their son, and a woman living 560 miles away recognized the photo and thought it could be this orphan boy who would sometimes sleep in her café.  She showed the boy a picture of the family and he explained “That’s mother!”.  The family would soon be reunited as one.