From Compton to Harvard! 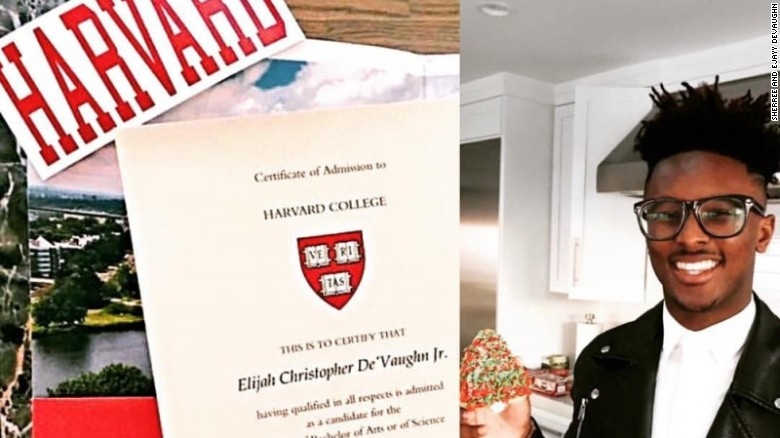 “It was a struggle.  It was rough,” Elijah says of his time growing up in Compton, where only a little over half of students graduate high school.  He remembers a defining moment when he was little:  “It was kind of late at night, my mom ran into my room, and they were shooting outside.  So we would lay, actually, right there, kind of looking at each other.  I was just…looking at my mom for strength … That moment changed me forever.  I knew I would have to leave Compton.”

Elijah worked hard to achieve his goals, immersing himself in his studies, and never losing focus of his academic goals.  He was accepted to a prestigious high school, over an hour away from home, and there he excelled – using the long commute to study.  Academics always came first, and he achieved a 4.69 GPA on a 5.0 point scale.  He was also a star football player, a track athlete, a leading actor in the school’s productions, and chair of the school’s peer mentoring program.  He became fluent in Spanish.  “I think that struggle – it ignites a fire under you to want to work hard and to want to do more,” he said.

“Everything in his life is preparing him for his future,” his proud mother said.  “He has been through a lot, he has seen a lot and guess what? It made him stronger.”  Elijah credits his mom with getting him to where he is, and she credits him with giving her the strength to be a mom.  His mother raised him alone for 13 years while his dad was in a federal penitentiary.

And where is he now?  Only five percent of applicants are accepted into Harvard, one of the world’s most prestigious universities, and 17-year-old Elijah is one of these elite Harvard bound graduating high school seniors!!!   Harvard awarded Devaughn a complete tuition, room and board scholarship, and his mom set up a GoFundMe campaign to help with books and other school expenses.

Where will Elijah be in 10 years?  “Umm, maybe med school, maybe Wall Street, or maybe an actor on somebody’s stage,” he says. “I don’t know, but I will be somewhere great. I know that.” Ducking for cover when he hears the ricochet of gunshots outside his bedroom window will now be a distant memory.

May the Good News brighten your day!

Spread the love
2018-12-28
Previous Post: FSU Football recruit is special on and off the field
Next Post: High School Students work on a project to create solar-powered shelters for the homeless