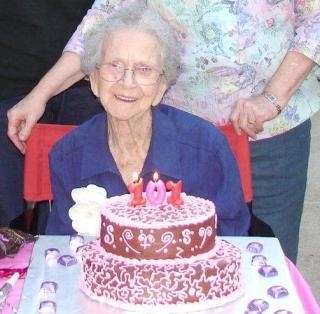 “The Lord has been very good to me and still is,” Nite said Tuesday morning.

At 101, Nite takes only a walker to keep steady, but only takes a couple of medications and is in otherwise agreeable health. One thing that hasn’t gone with the years, neighbors say, is her quick wit and sense of humor. She’s a dog lover, and even allows her son’s chihuahua to sleep in her bed.

In celebration of the milestone, about 20 neighbors showed up to throw Nite a birthday party on Monday evening, complete with her requested grilled hamburgers and yellow cake with chocolate icing.

“We were wild people,” Nite said with a smile. “My favorite part? Well, I’d have to say it was the eating.”

Nite  lives with her son and daughter-in-law, Noel and Elaine Cameron, across the street from neighbors Don and Rachel Broyles. The Broyles said Nite is a beloved and valued asset to the neighborhood and they wanted her to feel special on her big day.

“We had lots of fun last night,” Rachel Broyles said on Tuesday morning in the Cameron’s living room. She joked that they had all been up past their bedtimes.

“There were three candles on her cake, one-zero-one,” she said.

“We might have started a fire if we had 101 candles on there,” Nite said. “Or they might have crushed the cake.”

When asked questions about growing up in the mid-1900s, like who her favorite president had been, Nite thought for a few moments then said she didn’t pay attention to politics.

That might be part of the reason she’s lived so long.

Her favorite vacation or most fun memory?

“I started to turn around and ask my son, but I remembered he wasn’t even born then,” she said amid laughter. “Well, my daughter-in-law’s mother and I were very good friends.”

“No, they were BFFs,” Rachel Broyles interjected. “They could laugh and laugh.”

“We didn’t have any bad words with each other,” Nite continued. “We had a lot of fun. If I can’t find anything to laugh about, I’m going to go home.”

The two friends would make trips to Dallas, using the drive as an excuse to visit Noel and Elaine who lived there. However, it was really all about the shopping, Elaine Cameron said.

Nite said the real secret to her longevity is chocolate.

“About a month or so ago, Nite went and saw the eye doctor, and they had a birthday party for her,” Rachel said. “They had a chocolate cake and I asked how they knew she liked chocolate? Nite said, ‘Well I think everyone knows I like chocolate.’ We always have to come with a toll of chocolate to see Nite.”

Nite said her favorite kind of chocolate is Hershey’s Bliss, but she’s not overly picky and will pretty much eat any kind of chocolate she can get her hands on. In fact, Rachel Broyles said, there are secret stashes of chocolate all over Nite’s room. Nite said she’s long ignored the warnings of eating the sweet indulgence, giving in to her desire whenever she pleased.

“We heard the pictures [of the party at the eye doctor] were going to be on Facebook, but we didn’t know what page to look under,” Rachel Broyles said. “Well, Nite turned around and said, ‘Why don’t you look under Beautiful Lady?’ And I said, ‘Of course, why didn’t I think of that? There is no other lady as beautiful as you.’”

Going into the next year, Nite said she feels like the Lord has been “extra special” to her for allowing her to live so long, and plans to continue doing her usual activities in the meantime.

“That reminds me,” she said. “I haven’t had any chocolate today.”