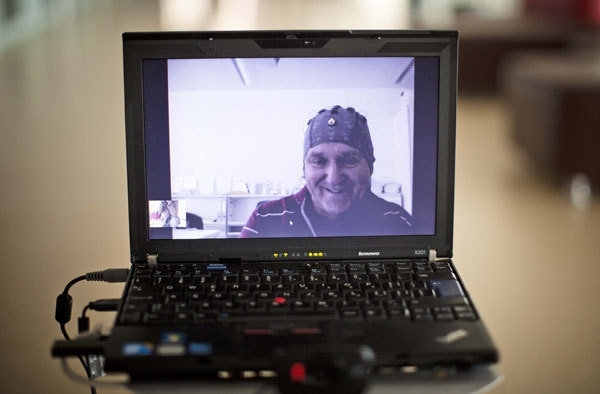 Mind-reading robots? It’s not as scary as it sounds.

Researchers in Switzerland are developing a robot that can respond to human thoughts, and may one day help immobile people better interact with the external world.

On Tuesday, scientists from Switzerland’s Federal Institute of Technology in Lausanne marked a milestone in this research, when they demonstrated that a partially paralyzed man could control the movements of a 1-foot-tall robot from more than 62 miles away, the Associated Press reported.

The human guinea pig was Mark-Andre Duc, a hospital-bound Swiss man who has lost control of his fingers and legs and is considered partially quadriplegic.

The robot was a foot tall little guy equipped with a camera and monitor — making it look like a rolling laptop with Duc’s face displayed on the screen.

Duc was fitted with a simple head cap able to record the signals emitted by his brain when he imagined lifting his paralyzed fingers. The signals were decoded by a laptop at the hospital and were then transmitted to the foot-tall robot scooting around the Lausanne lab, 62 miles away.

Duc told the AP that it was fairly easy to control the robot using nothing but his thoughts on a good day, but it became more difficult when he was in pain.

That’s because the robot needs the thinker to focus entirely on controlling the robot. Other thoughts such as pain considerations, or paying attention to a television show that might be on in the same room, weaken the strength of the brain waves.

It should be noted this is not the first time scientists have demonstrated the workings of mind-reading robots, but previous experiments have involved either able-bodied patients or invasive brain implants.