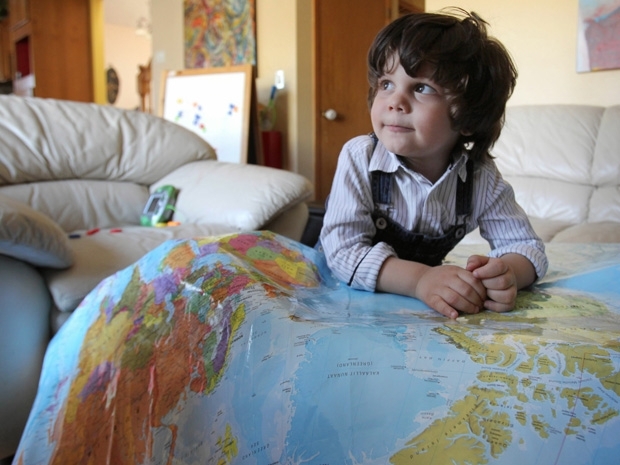 CALGARY — He’s not quite out of diapers yet, but a Calgary toddler has become the youngest person in Canada to join the ranks of the international high IQ society, Mensa.

Meet Anthony Popa Urria. At two years and nine months, Anthony has a staggeringly high IQ score of 154, just a few points shy of the estimated IQs of Albert Einstein and Stephen Hawking.

While most of his peers are singing Itsy Bitsy Spider and drawing crayon scribbles, this bright toddler spends his time reciting the alphabet backward and forward, counting to 1,000, and listing the planets in the solar system, days in a week, months in a year and the seasons.

He also speaks three languages (English, Spanish and some Romanian), can read full sentences in books he has never seen before, can write his own name and many other words, and can solve complex 70-piece puzzles, among his vast skills.

‘He was very alert since he was about four months old. He was curious, looking around’

On a Friday afternoon in the Popa Urria household, the rambunctious youngster seems like any other two-year-old.

Sitting on his blue, yellow and red tricycle, Anthony helps himself to a spoonful of chocolate ice cream.

“Yummy!” he exclaims with a sweet smile after the first bite.

But as he peers over a gigantic illustrated atlas more than twice his size, points to and identifies the capital city of Madagascar (it’s Antananarivo, in case you didn’t know), it’s clear the youngster is no ordinary child.

His grandmother Felicia, who looks after Anthony during the day while his parents are at work, said she noticed early on that baby Anthony was an exceptionally quick learner.

“He was very alert since he was about four months old. He was curious, looking around,” said Felicia.

At the age of six months, Felicia realized he could identify letters of the alphabet.

“He wasn’t even speaking yet, but my mom would have three flash cards up and she would say, ‘Pick the letter C,’ and he would point to it,” explained Anthony’s mother Laura, who herself holds four degrees, including a master of economics.

By 10 months, he was sounding out the alphabet phonetically.

At first, mother Laura said she was skeptical. She wondered if her son was simply memorizing the letters without comprehending them.

But then, one day, she saw him manipulating wooden blocks with painted letters, turning a ‘W’ upside down to resemble an M, or inverting the number 7 to look like an L.

“He actually recognized the relationships, and I thought, ‘Well, that’s impressive,’” she said.

In February, Laura took him to London, England to have his IQ tested.

“We wanted him to be tested to give him better opportunities,” explained Laura. “I knew he was smart, but he’s smart compared to the norm. I just wanted to see exactly how smart he is compared to other kids.”

Anthony met with esteemed British psychologist Dr. Joan Freeman, known for her research on gifted people, who confirmed their thoughts.

“Naming alone is a first step in learning, being able to describe the function and selection of items are more advanced skills, which Anthony did well above his age level,” Freeman wrote in his report.

Although she is proud of her son, Laura said she is worried about how he will cope once he starts school.

While Anthony is exceptionally intelligent, his emotional development is still on par with other children his age. That poses difficulties in his future education, she said.

When Vicki Herd, a national board member for Mensa Canada, first saw Anthony listed as a new member of the society, she was convinced there had been a typo.

“We thought, ‘Hey, they must have got the birth date wrong!’” she said with a laugh.

Across Canada, there are only seven other members of Mensa aged 10 and under. The next oldest member after Anthony is five.

The average IQ for adults is 100, while most Mensa members have IQ’s above 135, she estimated.

While any parent would be ecstatic to learn their child has higher than normal intelligence, Herd said it’s important for parents of gifted children to ensure they are still able to socialize with other children and to learn other important life skills.

“You don’t want them to end up like Sheldon from the Big Bang Theory!” she joked.

Anthony is not the first kid genius to become a card-carrying Mensa member.

Earlier this month, a four-year-old British girl with an IQ of 159 became a Mensa member. In 2009, another British child reportedly became the youngest Mensa member ever at two years and four months old, according to the BBC.