By: Jon
In: Sports
Tagged: baseball 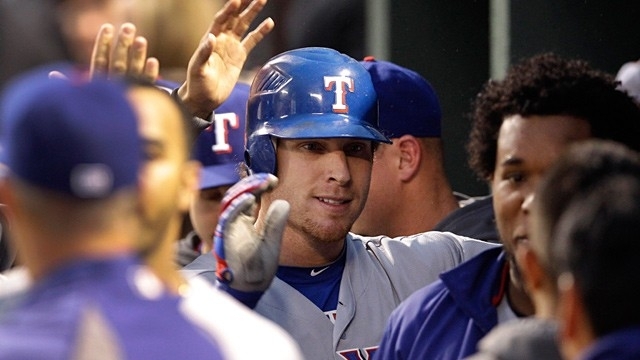 “Obviously it’s, other than being in the World Series, the highlight of my big-league career,” Hamilton said.

Hamilton homered off Jake Arrieta in the first and third innings, added another off Zach Phillips in the seventh and topped it off with a one-for-the-books shot against Darren O’Dayin the eighth. During the last at-bat, Hamilton took a mighty hack and missed, lined a foul into the right-field seats and then sent an 0-2 pitch over the center-field wall.

“I was saying after I hit two that I had never hit three in a game before. What a blessing that was,” Hamilton said. “And then to hit four, it was just an awesome feeling to see how excited my teammates got.

“It reminds you of when you’re in Little League and a little kid, and just the excitement and why we play the game. Things like that. You never know what can happen. It was just an absolute blessing.”

It marked the 16th four-home-run game in major league history. Hamilton is the first to accomplish the feat since Carlos Delgado did so on Sept. 25, 2003, for Toronto against Tampa Bay. Two of the 16 players to hit four homers in a game did it before 1900. Hamilton is the sixth AL player to perform the feat.

“Thanks for all of the nice messages tonight…” Green wrote, “and thanks Josh Hamilton for getting people to remember me!”

But Hamilton said it was hard for him to measure the magnitude of what he just did.

“It’s like anything else — you do something good or something incredible happens, it takes a little bit for it to sink in,” Hamilton said. “I think when I get away from everybody and I have some time to myself, I think it might then.”

Hamilton’s record-setting night is the latest accomplishment in a career that almost never was.

He went from first round draft pick in 1999 by Tampa Bay to out of baseball all together because of drug and alcohol addiction.

He recovered and returned to the majors in 2007 with Cincinnati, and was traded to the Texas, where he has become a star — the AL MVP in 2010 — while still battling his addiction. He had a relapse before this season, but is off to a torrid start.

“Understanding that what I’m doing and what God’s allowed me to do coming back from everything I went through and allowing me to play the game at the level I play it, it’s pretty amazing to think about,” Hamilton said.

It was Hamilton’s fifth multi-homer game, but the first time he’s hit four home runs in one game. The eight RBIs are a new career high for the slugger and his 18 total bases in the game broke the club record last set by Jose Canseco on June 13, 1994 against Seattle. The 18 total bases set a new AL record and was one shy of the major league record held by Green.

Hamilton, who will turn 31 later in May, also added a double in the fifth inning.

It reminds you of when you’re in Little League and a little kid, and just the excitement and why we play the game. Things like that. You never know what can happen. It was just an absolute blessing.

O’Day called the pitch Hamilton clobbered to dead center for his fourth home run — an 0-2 sinker that didn’t sink — “the worst pitch of my career.”

“[The] guy’s already got three bombs and I had him 0-2 and I throw it right over the middle,” said O’Day, who was Hamilton’s teammate with the Rangers in 2010 and 2011. “I couldn’t have soft-tossed it any better to him. I’d like that pitch back for sure. You can’t say enough about the day he had.”

“He’s unbelievable. It couldn’t happen to a better guy. It’s amazing to sit there and watch. I couldn’t believe it,” Holland said.

Shortstop Michael Young said after Hamilton’s first home run it was obvious he was locked in.

“He earned it. Three to center and one to the opposite field. Those aren’t garden-variety homers. Those are earned,” Young said. “Just an incredible game. You could tell form his first at-bat he was locked. First-pitch curve ball from a guy that he hasn’t seen all season. He hits it out. That’s when you know he’s seeing it well.”

Hamilton also hit a two-run home run in his final at-bat on Monday’s win over Baltimore, giving him five such homers in his last six at-bats.

“This is just a couple of games. This could get even better. We don’t know,” Holland said. “There’s more to come. It’s unbelievable to see what’s going on with this guy.”

Hamilton, who is in the final year of his contract and could become a free agent after this season, leads the AL with 14 homers and 36 RBIs, and his 5-for-5 effort raised his batting average to .406.