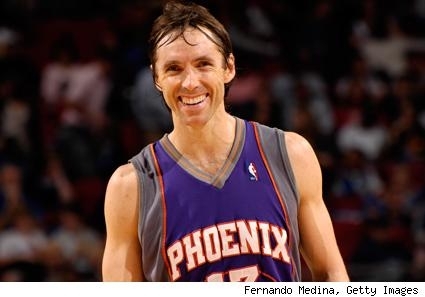 Steve Nash has made his first big basketball decision of the summer, agreeing to become general manager of the senior men’s national team for Canada Basketball.

Nash, who will be a highly coveted NBA free agent this summer, will be introduced in his new role at a news conference Tuesday in Toronto. The arrangement will be similar to the one Wayne Gretzky had with Hockey Canada in advance of the 2002 Winter Olympics in Salt Lake City.

Maybe the timing of this will seem a little bit odd because I’m still playing, but this is about trying to impact a bunch of kids, trying to be a good resource and a source of some good.

“Obviously I love the program,” Nash told ESPN.com. “It was a huge part of my development as a player. Going to the Olympics (in 2000) was the best experience of my career.

“So if I can help other Canadians experience that, it would be pretty amazing. I want to try to lend my hand to help develop our system and change the image and reputation of this country internationally and be a resource for as many of our good, young kids as possible.”

Long known back home as “Captain Canada” after leading a team of unknowns to within one win of the medal round at the 2000 Sydney Games, Nash hasn’t played for his country since the qualifying rounds for the 2004 Olympics in Athens.

As part of his new job, Nash will have a strong say in the hiring of Canada’s next coach. Former Toronto Raptors coach Jay Triano, who was in charge for the Sydney Olympics, is regarded as an overwhelming favorite for the post after he completes his summer stint as an assistant to Mike Krzyzewski with Team USA at the London Olympics.

There is quiet optimism that Canada’s basketball fortunes could be on the rise after Tristan Thompson and Cory Joseph were first-round picks in the 2011 NBA draft. Nash is optimistic the number of Canadians in the NBA could rise to double digits “in the next five years.”

“Maybe the timing of this will seem a little bit odd because I’m still playing (in the NBA), but this is about trying to impact a bunch of kids, trying to be a good resource and a source of some good. We have a lot of developing talent in our country and I’m excited to help them,” Nash said.

Nash will be assisted in the job by former Olympic teammate Rowan Barrett, who will run day-to-day operations as assistant GM. The next major competition for Canada’s national team isn’t until summer 2013, when it will try to qualify for the world championships, which FIBA is rebranding as the World Cup.

As for his forthcoming return to free agency in July for the first time since summer 2004, Nash said: “I’ve been so busy with this that I haven’t had much of a chance to start thinking about it. In the coming weeks, I’ll definitely start to think about what I’m going to do.”

Nash, 38, told ESPN.com last month that he wants to play in the NBA for at least three more seasons. He’s also said in recent weeks that he has not ruled out re-signing with thePhoenix Suns, but intends to test the open market.