Hire Me! Billboard Sign Gets 22 yr old a Job

By: Jon
In: Business 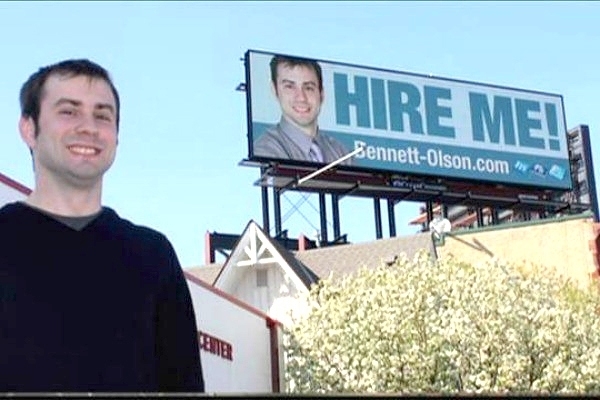 Cover letters not working out? Already tried guerilla social media strategies to get noticed by a potential employer? Think bigger.

After losing his job at a casino in March, 22-year-old Bennett Olson needed a job, and he needed to stand out.  So, naturally, the Minnesota resident took a cue from the Paul Rudd-Jason Segel bromance I Love You, Man and bought space on an electronic billboard near downtown Minneapolis last month, KTSP reports.

The billboard featured an 8-second clip of Olson’s smiling face next to his message, “HIRE ME!” He also included the address of his personal website. His $300 investment in 24 cumulative hours of screen time paid off, too: Olson was hired for a marketing position by a 3D scanning company in Bloomington.

“After receiving quite a bit of attention, support and ultimately interviews I felt that Laser Design & GKS Services was the right fit because they are a young, yet established company which will provide me with the opportunity to learn and grow my career,” Olson told KARE 11.

It’s a tough economy, but what’s next? Blimps? Flash-mobs in the company parking lot? Singing telegrams? Maybe the next growth industry will be coming up with novel jobhunting strategies.

Got a better idea on how to get a job? Let us know in the comments.