By: Jon
In: Sports
Tagged: hockey 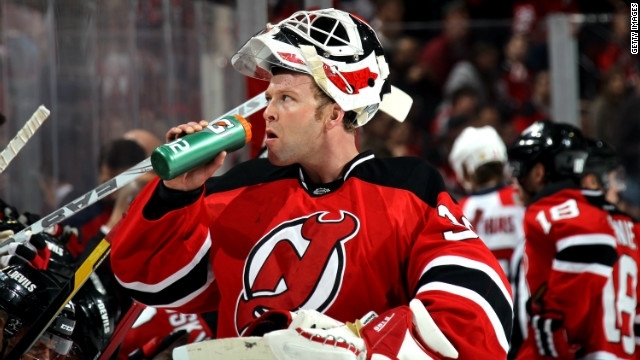 (CNN) — Martin Brodeur was unstrapping his goaltending pads after another victory, about to be rushed to a TV interview, when a reporter on deadline made a request. Could he answer just one quick question?

“Yes, I’m 40,” Brodeur cracked, predicting the question before it could be asked. “For some reason, that’s a big deal.”

Well, it actually is, and the reason is simple: Brodeur couldn’t celebrate the milestone — his birthday was May 6 — because he was too busy notching another win en route to leading the New Jersey Devils to the Eastern Conference Finals.

And now, as the playoffs move to the final two rounds, Brodeur has a chance to win the Stanley Cup at an age when most players already have hung up their skates and picked up their golf clubs.

Turning 40 usually means collecting your gag gifts and waking up with a hangover and a realization: You’re not as young as you used to be. For Brodeur, it means doing what he’s done his entire adult life: winning hockey games at the highest level in the sport.

No goaltender in NHL history has won more games than Brodeur: His 656 career victories are 105 more than Patrick Roy, who is second on the list. The next active goaltender on the all-time list, Roberto Luongo, has just 339, so it’s a record that may never be broken.

And no one has appeared in a playoff game in his teens and his 40s, which became another line on Brodeur’s long résumé this week. He is the definition of longevity, and he’s not just hanging on by the edge of his skates, either.

“You go out, and you compete against players that are such a young age,” Brodeur said during the Devils’ second-round series against the Flyers, which they won in five games. “I’m more than twice the age of (Devils rookie defenseman) Adam Larsson. I mean, you kind of shake your head a little bit.

“But you’re able to play at a level when you’re having fun and you’re able to compete in a league you always wanted to play and still be able to keep going. For me, I don’t take anything for granted. I appreciate every moment, especially this year. It’s been awesome for me.”

Brodeur has spent his entire career outside the limelight. That comes with the territory of playing in the NHL, the least popular of the four major U.S. sports leagues, and playing for the Devils, who lack the following of their rivals across the Hudson River, the New York Rangers. The Devils, despite their continued success, are rarely picked for national TV games.

That doesn’t diminish what he could accomplish this spring. When Brodeur won his first Stanley Cup, he was just 23. Now, if the Devils continue their hot streak through the playoffs, he could win his fourth at 40.

That would be a 17-year gap between his first title and his last one. There aren’t many athletes who can match that, but two who did — Kareem Abdul-Jabbar and Babe Ruth — are recognized amongst the greatest in sports history.

His critics have said that Brodeur benefited from the Devils’ defensive approach for years. But his former role model — who later became his biggest rival — thought that argument was unfair.

“I remember in the playoffs, he once said he was facing more critics than shots,” said Roy, who owns most of the NHL goaltending records that Brodeur doesn’t have. “I thought it was a nice way to deal with the pressure. From the outside watching him, he almost makes it look easy, but I know how tough it is.”

Roy retired in 2003, when he was 37. Brodeur is in the final year of his contract but has said he’s leaning toward coming back next year — his 20th in a Devils uniform — “if they’re going to take me back.”

He said he’s having too much fun to stop now.

“You have to enjoy what you do,” he said. “I’ve been here for so long that I’ve had different roles regardless of me playing or not playing. Just watching guys and helping guys during their careers to make the right decisions. You have to think the right way and go through hurdles for success.”

The 40-year-old goaltender is doing what’s he’s done for two decades now: winning hockey games. About the only time he shows his age is when he counted the candles on the birthday cake from his family. There were only about 20 of them.

“Couldn’t find a big enough cake, I guess,” he said with a laugh