By: Jeremy
In: Environment 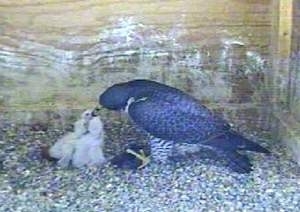 For the 16th year in a row, the Mid-Hudson Bridge is home to newly hatched Peregrine falcons.

The chicks, known as eyas, are the 42nd, 43rd and 44th birds fledged from the nesting box on the bridge.

“It’s an annual tradition,” said Joseph Ruggiero, executive director of the state Bridge Authority. “We are fortunate that our facilities have been so successful in helping re-establish such a beautiful and important species.”

The bridge authority hosts nesting boxes on each of its five Hudson River vehicle bridges. The boxes were installed in the late 1980s as part of an effort to restore the endangered Peregrine in the Hudson Valley.

The Peregrine is the fastest bird on the planet, soaring to heights of half a mile then diving at speeds in excess of 200 miles per hour. The top speed recorded for the falcon is 243.3 mph.

The northern-nesting bird are among North America’s long-distance migratory species, traveling as much as 10,000 miles a year. Peregrines mate for life and usually return to the same nesting spot each year. The birds grow to about 15 to 21 inches long and have a wingspan of more than three feet. The name Peregrine means “wanderer.”

The authority and state Department of Environmental Conservation provides live snapshots of the nest at http://www.dec.ny.gov/animals/53052.html.

Spread the love
2012-05-16
Previous Post: Kyrie Irving Runs Away with Rookie of the Year
Next Post: Jay-Z Supports Gay Marriage