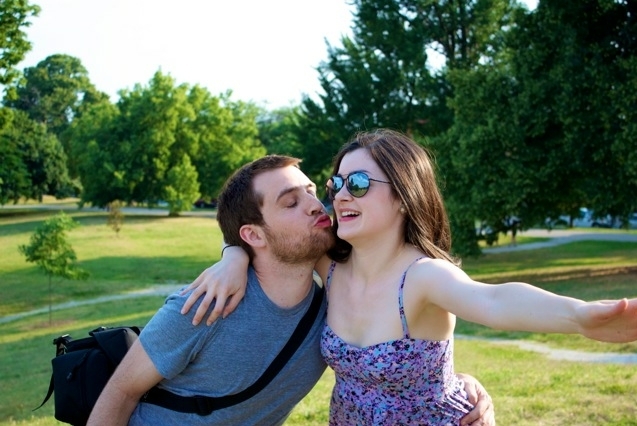 Today’s proposals aren’t like the old days.  So it should be no surprise that when a boy wants to propose to his best girl, he might want to pop the question with a little pizzazz.  Enter Albert Smith and his flash mob marriage proposal.

A beautiful young girl walks down Thames Street in Fells Point, tricked into being on camera. As she walks, the Turtles’ classic love song, “Happy Together,” blares on a boom box behind her. People holding up homemade props pop out around the corner. Waiting at the end of the street is a handsome boy with a ring.

Sounds like a John Cusack movie being shot in Baltimore right?

“I knew when I wanted to purpose to Lauren, I wanted to do something with music,” Smith said. “I knew it had to be bold, it had to be creative. So I tried to figure out how to do that and I settled on a flash mob proposal music video. It would make a really great story and she would be excited to retell the story for years to come.”

In November, Smith started coming up with ideas. He and Hutchenson had been dating for a little over two years and Smith knew she was “the one.” He decided on the flash mob proposal over his other ideas, and it took him another week to find the perfect song, The Turtles’ “Happy Together.”

“Believe it or not, I grew up listening to that song,” Smith said. “It’s one of my favorite songs. I grew up singing it and honestly any time that song came on I thought about singing it to my future wife some day.”

In late December, Smith recruited friend Jason Denney and they began working out details for a flash mob proposal. They invited friends and friends of friends to help with the “mob” aspect of it. There were 40-plus people who showed up, Smith said.

After two test runs, Smith was ready for his March proposal.

“I didn’t want it to feel so rehearsed or so perfect, that it would feel stale,” Smith said. “We wanted the fun and the chaos of the moment.”

Meanwhile, Hutcheson had no idea that her boyfriend was proposing. She had just finished band practice when Denney approached her about being in a video project filming people walking down Thames Street.

“If anyone else had asked that, I wouldn’t think that’s real,” Hutcheson said. “But because it was Jason, I did it. He likes to do random stuff like that. But it was kinda odd that they asked me to walk first.”

At first she felt a little awkward, Hutcheson recalled, as the “filmmakers” followed her down the street with cameras.

“When the music started playing, it took me a good 15-20 seconds for it to set in … this was a love song. I know this song. I like this song,” said Hutcheson, pleasantly surprised that this would turn into a proposal, when friends popped out along the way with props.

Smith met her at the end of the street with a crowd.

“When I realized what was happening, I zoned in on Albert,” Hutcheson said. ” We had that moment. Time stood still, I know that’s cliché but it did. I think it was really nice of him to think those kinds of details through.”

Among the reactions to the couple’s proposal story, perhaps one of their most favorite comes from Smith’s dad.

“My dad actually wanted to fly up here to see it,” Smith said, “the first thing he said was ‘we didn’t do things like this when I was your age.’”

The couple plans to wed on Sept. 22nd.

Baksh, Stokely. “So Happy Together: A flash mob wedding proposal in Baltimore”. Baltimore Sun. 15 May 2012. Web.