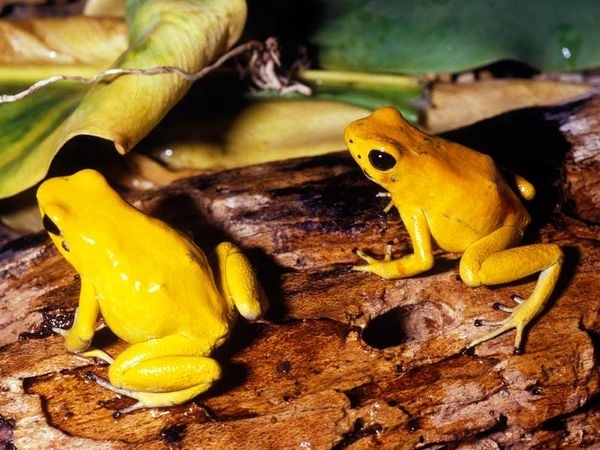 The golden poison dart frog, which is arguably the world’s most poisonous animal, is now residing in the first ever sanctuary established to save the deadly, yet endangered, amphibian.

The poison of this frog is so toxic that even coming into contact with a paper towel that has touched the frog can be fatal. A single 2-inch-long frog has enough poison to kill 10 adult people within minutes.

“Death by frog,” in this case, is pretty horrific too. Its bright orange skin is covered by a secretion of deadly alkaloid poison (batrachotoxins). The toxin prevents nerves from transmitting impulses, leaving muscles in a constant state of contraction, leading to heart failure. Death comes within minutes.

The frog has its place in the ecosystem. Our ancestors somehow managed to use the poison for hunting, maybe permitting their own survival. It just uses the poison for defense. And, you have to admit, the frog is pretty cool, in a James Bond-weapon kind of way.

As journalist Simon Barnes wrote in The Times of London newspaper in September 2011: “Astonishing: we are on the edge of wiping out one of the most extraordinary and thrilling creatures on the planet. No matter how well a creature is protected by nature and by evolution, it is always vulnerable to humans. There’s nothing we can’t do when we put our minds to it. Still, at least we are now beginning to put our minds to saving the golden poison frog: we would all be much poorer without such a creature to give us nightmares.”

The new sanctuary, consisting of 124 areas of threatened Chocó forest, is named the Rana Terribilis Amphibian Reserve. That comes from the Spanish word for frog — rana — and the frog’s Latin name,Phyllobates terribilis.

The land, in one of the planet’s wettest tropical rainforests, was purchased with the help of the World Land Trust, American Bird Conservancy and Global Wildlife Conservation. The reserve is owned and managed by Fundación ProAves, Colombia’s leading conservation organization. This is the second amphibian reserve owned by ProAves in Colombia; the first is the Ranita Dorada Reserve.

“The support from our partners made the creation of this critical new reserve possible, and one of the world’s most amazing creatures, the beautiful and deadly golden poison frog, is now protected,” Lina Daza, executive director of Fundación ProAves, said in a press release.

George Fenwick, president of the American Bird Conservancy, concluded, “We need to halt the continued, rapid disappearance of rainforests and the resultant loss of wildlife that depend on them.”