Make that 20 for the Spurs 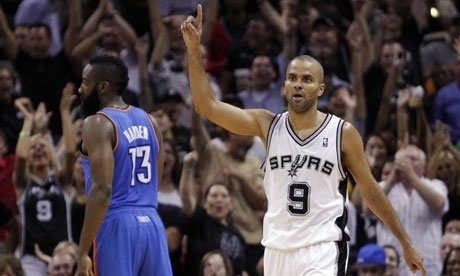 You have to be a true NBA fan to appreciate the brand of basketball the Spurs are displaying right now. Playing the game the way it should be played.  Teamwork, ball-movement, unselfishness, are a few of the ways in which the San Antonio Spurs have marched their way to their 20th consecutive victory bridging the regular season and the playoffs.

This brand of basketball could only be played by the Spurs and I’ll explain why…In a league that is marketed by each teams superstars, the players become somewhat selfish in their ways, and enjoy the spotlight. The Spurs superstars Manu Ginobli, Tony Parker, and Tim Duncan are absolutely the most unselfish superstars the NBA has in their league today. None of these players care about individual accolades, but just have the will to win.

Manu Ginobli could start for any team in the league, but comes off the bench because its what is best for the team. If you watch the Spurs carefully, you will notice that 75% of the time they are taking uncontested jumpshots.

Behind the mastermind of the NBA Coach of the year Greg Popovich, the Spurs have moved the ball better then any team in the league, and will always make the extra pass to find the open man. They have also made some amazing acquisitions during the course of the year by picking up Stephen Jackson, and Boris Diaw in separate trades.

In Game 2, The Oklahoma City Thunder looked confused, and a step behind in trying to figure out how to defend the Spurs pick and roll game. Tony Parker made 16 of 21 shots en route to scoring his playoff high 34 and also passed out eight assists, winning his duel with fellow All-Star Russell Westbrook.

As the series shifts to Oklahoma City for Games 3 and 4, the challenge becomes daunting for the Thunder. They must win four of five over a team that hasn’t lost since April 11. Its a lot to ask, but if anyone can do it, you can probably count on the NBA’s 3-time scoring champ Kevin Durant.