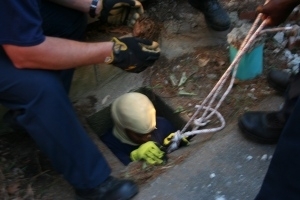 ATLANTA (AP/WAOK) – Authorities say East Point’s smallest firefighter was able to squeeze into a storm drain to rescue a toddler who had fallen inside.

Fire officials say 1-year-old Darnell Brown’s foot slipped into the drain Sunday night, and he then rolled 20 to 25 feet to the bottom.

East Point firefighters were called, and authorities say 4-foot-11-inch firefighter Rosa Tullis was able to wriggle inside the drain because of her small size.

Fire officials say Tullis squeezed into a one-foot opening before being lowered by a harness to reach the child. Tullis said she couldn’t reach the child at first, but on the second attempt she was able to get down further into the drain to grab him.