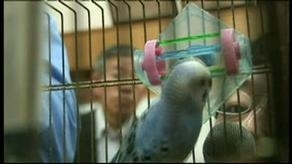 It seems all too simple, a parakeet goes missing, but is reunited with its owner after telling police where he lives.

Piko, the 2-year-old parakeet, was found Sunday at a hotel in Japan. After spending two days at a police station, Piko started repeating his address to authorities.

Police tracked down the woman that lived there, and sure enough, she was Piko’s owner. The two were reunited yesterday.

The owner says she taught her bird to repeat her address and phone number after losing a parakeet five years ago.