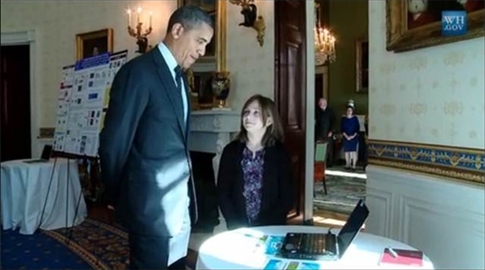 Hannah Wyman is a fifth-grader from Leominster, Mass., who, instead of aspiring to be a game maker like many other kids, is one today. And thus far, she’s doing a fairly decent job; Wyman was recently invited to the White House to show off her game “Toxic” to a captive audience, which included the president of the United States.

The game was created in “Kodu Game Lab,” an application that is geared toward game creation for novices (a more visually based environment is provided, free of the need for extensive programming knowledge), and is available for Windows and Xbox 360. The latter version is why “Kodu” has been often compared to “LittleBigPlanet” for PlayStation 3, which also offers authoring tools, though Microsoft’s take is a bit more extensive. (Msnbc.com is a Microsoft-NBC Universal joint venture.)

The Kodu forum thread details Wyman’s background as a girl who is mostly passionate about dance, and once witnessed her college-age brother trying to program a game of tic-tac-toe as homework. The amount of hours he put in, for something so simple, was less than impressive. But when a teacher of hers at Saint Anna Catholic School showed off “Kodu,” her opinion toward the process of making a game changed completely.

The result of her new-found enthusiasm was “Toxic,” which has an environmental theme. The following video has Wyman demonstrating the game, and which was created last year. So technically she’s a 10-year-old game designer as well:

“Toxic” was submitted to the Microsoft Kodu Cup, a competition aimed at game makers between the ages of 9 and 17, where it won the Grand Prize. The top spot nabbed a $5,000 grant for her school and a trip to New York City, where her game was submitted to Microsoft’s Imagine Cup. Which was where Wyman’s efforts caught the eye of the White House, and both she and her game were invited to be part of the White House science fair.

Wyman was one of 30 students who demonstrated her product to President Barack Obama himself. As Kotaku noted in its report, “Toxic” is a perfect example of the Obama administration’s desire to push science, technology, engineering, and math (STEM).

Is game making a possible career path for Wyman? It would certainly seem so. According to Joe Booth, executive producer at Microsoft Studios, “While our established video game rock stars like Cliffy B and Peter Molyneux continue to riff on familiar themes, Hannah, by addressing the themes that really matter to kids today, is demonstrating how digital media will be the art form of the 21st century.”