Ithaca Mayor Gives Up Car to Walk to Work 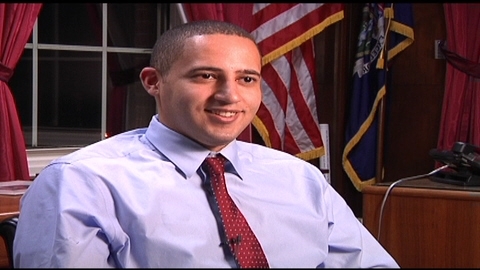 After Svante Myrick, 25, became the youngest-ever mayor of Ithaca, N.Y., he gave up his car to join the estimated 15 percent of his city’s residents who walk to work. As mayor, however, Myrick has a prime downtown parking spot reserved for his exclusive use. So instead of letting it stand empty, last week he began to, as he put it, “turn the Mayor’s parking space into a park space.”

Myrick hasn’t given up driving entirely; he belongs to the local Ithaca Carshare and told the Ithaca Times, “I love driving … I miss my car.” But he’s also working to enhance Ithaca’s transportation options. On his campaign website, he wrote, “The answer to too many cars is not necessarily more parking spaces … We can change traffic patterns and parking behaviors by providing alternative methods of transportation which are more affordable, reliable and convenient.” This guy is officially our favorite prodigy mayor since Ben Wyatt.