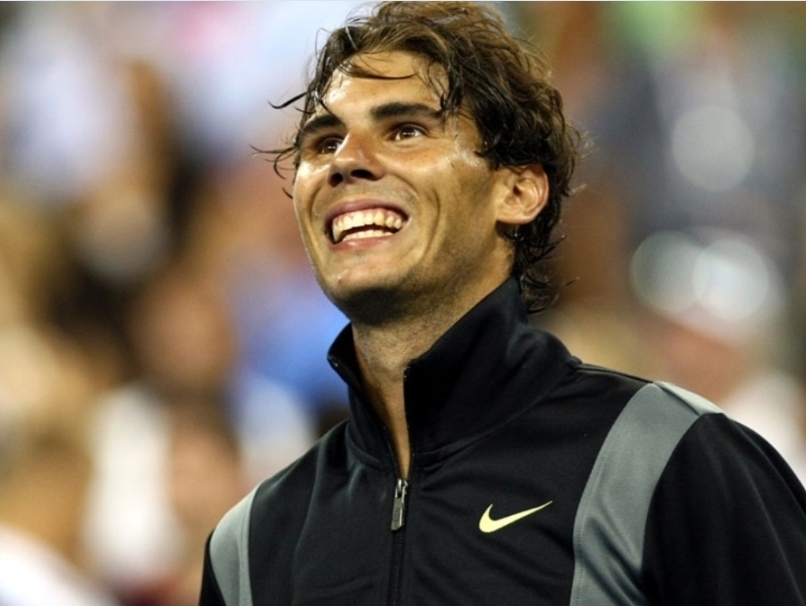 The man they call “Rafa” won his record seventh French Open title Monday, returning a day after getting rained out to put the finishing touches on a 6-4, 6-3, 2-6, 7-5 victory over Novak Djokovic.

He denied Djokovic in his own run at history — the quest for the “Novak Slam.”

The match ended on Djokovic’s double-fault, a fittingly awkward conclusion to a final that had plenty of stops and starts, including a brief delay during the fourth set Monday while — what else? — a rain shower passed over the stadium.

They waited it out and Nadal wound up as he has for seven of the past eight years: down on the ground, celebrating a title at a place that feels like a home away from home for the second-seeded Spaniard. He broke the record he shared with Bjorn Borg, improved to 52-1 at the French Open and beat the man who had defeated him in the last three Grand Slam finals.

“This tournament is, for me, the most special tournament of the world,” Nadal said.

After serving his fourth double-fault of the match, the top-seeded Djokovic dropped his head, slumped his shoulders and walked slowly toward the net — an emotional two-day adventure complete, and not with the result he wanted.

He was trying to become the first man since Rod Laver, 43 years ago, to win four straight major titles. He came up short just as Roger Federer twice did in seeking four in a row — his pursuit also halted by Nadal at Roland Garros in 2006 and 2007.

“It was a very difficult match against the best player in the world,” Nadal said. “I lost three Grand Slam finals — Wimbledon, the U.S. Open last year, and the Australian Open this year. I’m very happy, very emotional.”

Nadal won his 11th overall Grand Slam title, tying him with Borg and Laver for fourth among the all-time leaders.

Next up on Nadal’s list: Chris Evert? Yes. Before Monday, Evert was the only player, man or woman, to win seven titles at Roland Garros, and Nadal would break that record next if he wins No. 8.

“He’s definitely the best player in history on this surface and the results are showing that he’s one of the best-ever players to play this game,” Djokovic said.

A match with so much of tennis history riding on it proved awkward and frustrating for both players.

Unable to solve Nadal’s mastery of the clay, Djokovic was throwing rackets around early in the final. A bit later on Sunday, Nadal was complaining bitterly as the rain picked up, the tennis balls got heavy and officials refused to stop the match.

Djokovic rolled through the third set as the rain turned the heavy red clay into more of a muddy paste. He had all the momentum when play was halted, up a break early in the fourth. The weather cleared well before dusk Sunday and Djokovic said he was sitting around the locker room, ready to play.

But officials decided to call it a washout, setting up the first non-Sunday finish at the French Open since 1973, when Ilie Nastase wrapped up his title on a Tuesday.

“I said, ‘Good, we’ve had some luck. If we hadn’t stopped, we were going home,’ ” said Nadal’s uncle and coach, Toni Nadal. “Because Rafael was a bit blocked and Djokovic wasn’t missing any balls. He was hitting them all well. So we had some luck.”

When Nadal and Djokovic came back to Roland Garros on Monday under cloudy skies, they shook hands as they passed each other on the practice court. A bit later, the match resumed. Both the surface on Court Phillippe-Chartier and the tennis balls had dried out, and Nadal looked more like he usually does — sliding into his stops, spinning his powerful, looping shots, moving Djokovic around, always getting one more ball back.

“I’m not going back, saying it’s your fault and your fault because I lost,” Djokovic said. “It’s unfortunate because I was playing better, feeling better on the court in the third set yesterday. Today, he started strong. I started slower. I was a little bit unfortunate in that first game and things turned around.”

On the restart, Nadal broke serve right away to tie the set at 2-2 and the frustrated Djokovic was back — slamming himself in the head with his racket after missing an easy forehand that gave Nadal the break point.

It was one of 15 unforced errors in the set for Djokovic, who went back to trying to end points early and blunt the huge advantage Nadal has sliding around on clay. When the surface was muddy, the evening before in the third set, Djokovic only made eight unforced errors.

“But I don’t find an excuse in that,” Djokovic said, speaking of the decision to halt play Sunday night. “The better player won today, so congratulations on that.”

Play was nearly stopped with Nadal ahead 5-4 in the fourth, but the players sat under umbrellas for a few minutes while a rain shower passed, then they went back out. Both men held serve and Djokovic needed to hold once more trailing 6-5 to force a tiebreaker.

Nadal hit a big forehand winner to set up match point, and Djokovic, who had saved four of those in a quarterfinal win over Jo-Wilfried Tsonga, had no more magic. He double-faulted and dropped to 0-4 against Nadal at the French Open.

Nadal fell to his knees and buried his head in his hands, then clambered into the stands to hug his family.

Information from The Associated Press was used in this report.

Spread the love
2012-06-11
Previous Post: Ithaca Mayor Gives Up Car to Walk to Work
Next Post: Eating fish to keep your vision sharp in old age