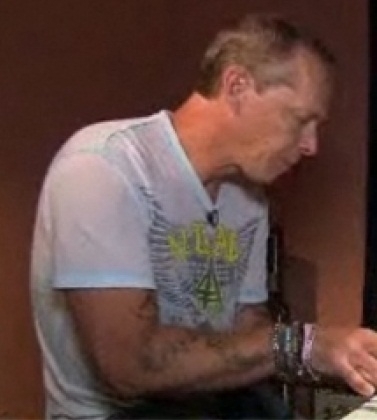 Six years ago a Denver, Colorado man hit his head hard after diving into the shallow end of a pool. Days later, he sat down at a piano and discovered he was a musical genius.

Derek Amato is one of just 30 “acquired savants” worldwide. Each discovered an inexplicable abilty that was unleashed after an incident.

Amato was 40 years old at the time of the accident.

“I remember the impact being really loud. It was like a bomb going off. And I knew I hit my head hard enough that I was hurt. I knew I was hurt badly,” he described in a Science Channel documentary.

He was taken to the hospital with a serious concussion, and suffered some memory loss and hearing loss.

A few days after the accident, Amato visited a friend who had a keyboard and felt inexplicably drawn to the instrument, he told TODAY on Thursday.

He sat down to play and beautiful, fully structured, original music flowed from his hands. He played until 2 a.m.

“As I shut my eyes, I found these black and white structures moving from left to right, which in fact would represent in my mind, a fluid and continuous stream of musical notation,” Amato said in a blog post on the Wisconsin Medical Society website.

“I could not only play and compose, but I would later discover that I could recall a prior played piece of music as if it had been etched in my minds eye.”

Though he had dabbled in the guitar before, he’d never touched a piano, Amato told TODAY.

Rare cases like this open up a whole new realm of scientific exploration, as scientists investigate how this can happen. The big question is: do we all have this superhuman ability built in, if we could just tap into it and release it?

Wisconsin psychiatrist Darold Treffert, who researches savants, told the Atlantic Magazine he believes that after a trauma, other regions of the brain step in to compensate for the loss of function, which rewires the brain in ways we can’t imagine.

Scientists have a few cases to study as they explore the question, the magazine reported.

Orlando Serrell was hit in the head with a basketball at age 10 and discovered he could remember the weather for each day after his accident. Alonzo Clemens suffered brain damage after a head injury at age three, but can create incredibly detailed sculptures of animals in just minutes.

Amato told TODAY that though he still gets painful migraines and has lost 35% of his hearing, it’s well worth it.

Amato left his corporate job and became a professional musician. He’s released one album of original compositions and is working on another.