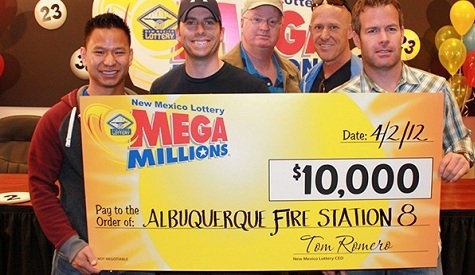 The Albuquerque Station Eight firemen who have decided to donate a part of their $10,000 Mega Millions share, had trouble trying to convince their fellow co-workers that their Mega Millions winnings were not an April Fools’ joke.

Captain Jed Hyland, Paul McClure, Steve Keffer, Clinton Anderson, and Si Do all agreed to donate their winnings in order to help raise awareness of Vince Cordova’s life-threatening ailment which requires an expensive life-saving surgery which will cost hundreds of thousands of dollars. The firefighters are hoping that their generous donation to local firefighter Cordova will ultimately lead others to do the same and donate towards the firefighter’s survival fund.

A message sent by Capt. Jed Hyland to members of the International Association of Firefighters (IAFF) read:

IAFF local 244 members at AFD station 8 won a sliver of the widely publicized “Mega Millions” lottery on Friday. We hit five out of six numbers and are to be awarded a cash prize. In an effort to continue in the charitable work begun by our generous and selfless brothers and sisters, the prize winning crew have pledged an equal share of their winnings to the IAFF Local 244 Firefighter Survivor’s Fund. Our contribution was inspired by the bold advocacy and selfless generosity exhibited by so many in our membership, and by our sincere desire to help our Brother Vince Cordova and his family, OUR family, in this time of crisis.

The five winning firefighters decided to buy their tickets “ten minutes before the sales closed,” according to Hyland.  While the firefighters might not have been one of the three contestants splitting the $640 million jackpot, they were closer than ever before with five out of the six winning numbers.   Jed was quoted as having said:

“We have a firefighter in need right now, Vince Cordova who we’re donating part of our winnings towards.”

Cordova will undergo the third and final operation to remove his tumor come Wednesday.  Before his first operation, he was quoted by KRQE News 13 as having said:

“I’m nervous. I’m scared. I’ve got butterflies in my stomach that just won’t leave, but I’m hanging in there. I can’t believe that the fireman bond is so strong. I just want to tell everyone thank you for standing by me and staying strong. Thank you for believing in me and I promise to see you guys soon!”