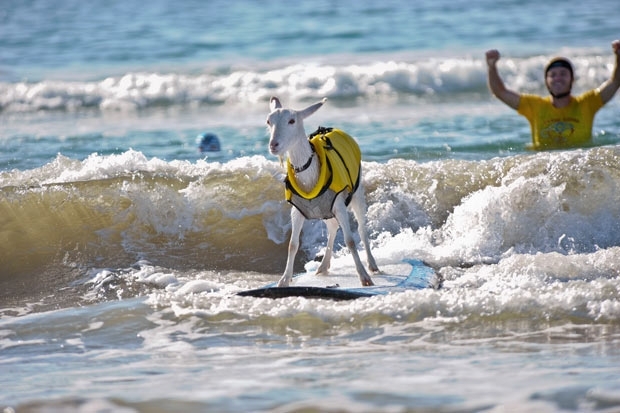 It’s official–the goats of California are definitely the coolest in the country.These two from Southern California, Goatee and Pismo, fit the bill: The goats have taken to surfing with their owner, Dana McGregor, who takes the pets everywhere–even into the Pacific Ocean.

The goat whisperer told the Associated Press he “taught his goats to surf because he loves to ride the waves and thought they would like it, too.”

The video shows beachgoers watching as the four-legged creatures catch waves on a calm day at San Onofre State Beach. Pismo and Goatee even ride tandem on the board. In another run, McGregor shares the board with one of the goats and a two-legged friend as the three catch a wave.

The famously sturdy legs of the animals certainly seem to be a natural for gnarly surf: The two goats hang loose–but not quite hang 10–and keep their balance as they ride.

McGregor, who originally acquired the nanny goat Goatee to eat unwanted plants on his property, began taking the goat to the beach with him, and eventually got her up on the board. Pismo has been a surfer goat for almost as long as he’s been alive. He was born in March.