By: Jon
In: Sports
Tagged: kayak 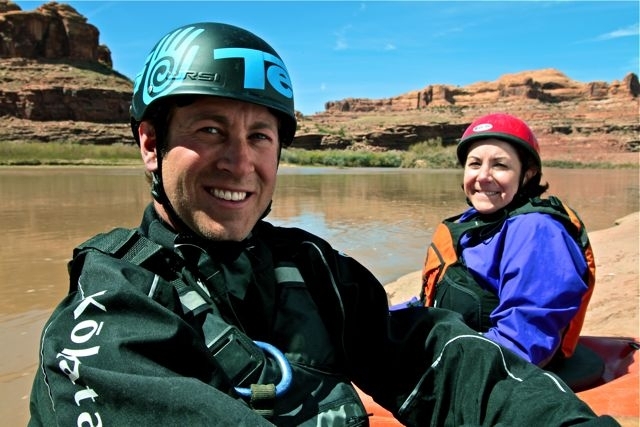 (CNN) — Brad Ludden is a world-class whitewater kayaker. Throughout his professional career, the 31-year-old has braved treacherous rapids in more than 40 countries and racked up over 100 first descents — successfully paddling a river’s uncharted territory.

Despite his success and the boyish good looks that landed him in Cosmopolitan magazine as “Bachelor of the Year” in 2008, the down-to-earth Montana native has always had a greater purpose: To use his passion for the sport to help young adults with cancer.

In the prime of his career in 2001, Ludden founded First Descents, a nonprofit that provides free outdoor adventures for adults ages 18 to 39 battling the disease.

It all started when Ludden’s aunt was diagnosed with breast cancer when he was 12 years old.

“That was the first time cancer had become very personal to our family. Seeing someone you love go through this disease really changes the way you view it,” he said. “Seeing how few resources were available to her as a young adult made me realize that there was a tremendous need there.”

So he turned to what he loves most — kayaking. In 2001 he took 10 people on a weeklong kayaking adventure to prove to them that they could be stronger than their cancer.

Since then, the organization has expanded to 13 employees and now includes rock climbing, mountaineering and surfing. It has grown from one program in Colorado to 50 programs throughout North America, Central America and South America.

“Cancer, especially as a young adult, can really send someone into isolation,” Ludden said. “They come to these programs and often for the first time since their diagnosis they meet someone else their age with cancer. They can have conversations about cancer that they couldn’t have before. They start to regain a lot of trust in themselves and a lot of confidence in their bodies.”

At a surfing event in Nags Head, North Carolina, 15 young adults came together to tackle the waves.

All the participants got nicknames so they could assume a new identity for the week — one that separates them from their cancer.

Joey Reed, a mother of four nicknamed “Hot Mama,” showed no fear on the water. But two years ago, things were much different.

Now in remission, Reed, 39, says the program has helped her gain a new perspective on life.

“Getting to be here was one of the dreams I’ve had,” she said. “I can conquer the waves. I can go after dreams still. I can be strong.”

Beth Pointer, nicknamed “Ripple,” was diagnosed last year with stage 4 molecular lymphoma. She is still undergoing chemotherapy treatments and said it was a gift to have the camp to look forward to.

Even though she has a strong support system at home, the 36-year-old is grateful for the new friends she made.

“You just laugh at all the crazy experiences that everybody who doesn’t have cancer would think, ‘Oh how terrible’ and give you this look. And they feel sorry for you,” she said. “Here there’s no pity. There’s just laughter. That’s been really good for me.”

“When I found out about First Descents, it seemed like a great opportunity to meet other people in my position and just get outside and enjoy something. It’s been amazing,” he said.

On his first day on the water he set a goal to stand up on the surfboard three times.

“The first and second, I was on my knees. And the third time, I finally got up,” he said. “They all said I came back with a huge smile on my face. It felt really good.”

Ludden, who was also at the beach, said his biggest reward is getting to spend time with the people he wants to serve.

“The participants every day inspire me. Every day I live differently because I’ve met them,” he said. “You only live once, and you don’t live for long. These guys remind you to get after it.”

Spread the love
2012-07-26
Previous Post: Older fathers may give longevity to their offspring
Next Post: 20th anniversary of Defcon hacking convention – increases knowledge on security