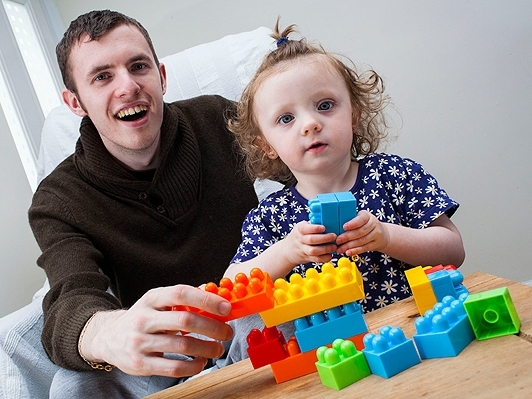 A young father who became trapped in his own body after suffering a stroke has learnt how to walk and talk again – by copying his baby daughter.

Mark Ellis was just 22 when he suffered a stroke and locked in syndrome – a nightmarish condition which leaves the sufferer’s brain still alert but their body paralysed.

The sudden stroke in August 2010, just two months after his marriage, left Mark completely helpless and he could only communicate by rolling his eyes. 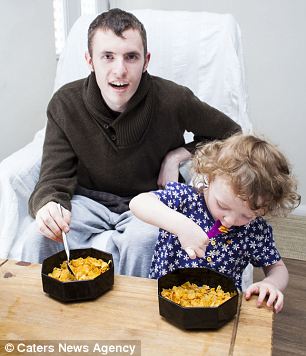 Having fun: Mark copied many of his daughter’s actions to help him recover

Mark, a previously fit and healthy young man, was put into an induced coma soon after his stroke and his shocked family were told it was unlikely he would survive.

But just eight months after his stroke, Mark amazed doctors when he left hospital and was learning to talk, move and walk again – thanks to mimicking the actions of his baby daughter.

Amy said: ‘It’s amazing that they have learned to do things together and now Mark can talk and walk with the use of a frame.

‘There wasn’t much time between him and Lola-Rose both taking their first steps. I think Mark took his first steps a week or two after Lola.

‘They use toys, books, games and the iPad together to learn how to do things and communicate.

‘Doctors didn’t expect him to survive but his youth and mental strength have helped him pull through.’

Just days before his stroke, Mark, from Clay Cross, Derbyshire had been working at a mobile phone shop when he started complaining of severe migraine.

He visited the Chesterfield Royal Hospital A&E department before going home to bed with some paracetemol.

But as the day progressed, concerned Amy called a doctor out and Mark was sent back to the hospital.

Amy said: ‘He was sent to Sheffield Hallamshire Hospital on the Wednesday for an MRI scan on Thursday morning, which showed the stroke had happened on the Tuesday.

‘It was just so hard to take in – we had been married two months and Lola-Rose was just two weeks old when the stroke happened. It was a dream turned into a nightmare.

‘He’s young and healthy, who’s never smoked, taken drugs or drunk excessively so it was hard to understand why and how this happened.

‘The doctors didn’t expect him to survive. They thought that after his stroke, his heart was going to give up.

‘I was asked to sign a consent form to say doctors wouldn’t resuscitate him if this happened.’

His worried family were at his bedside a week later when miraculously, Mark, now 23, came round from his coma.

But there was more bad news as he could still only communicate by rolling his eyes up for ‘yes’ and down for ‘no’.

Doctors found Mark had suffered a blood clot in his brain stem which they described as the worst they had seen in such a young man.

His family were told that it was likely he wouldn’t be able to walk and talk again.

But he amazed his family and medical staff a few months later when he managed to sit up and feed himself after intense physiotherapy and speech therapy sessions. 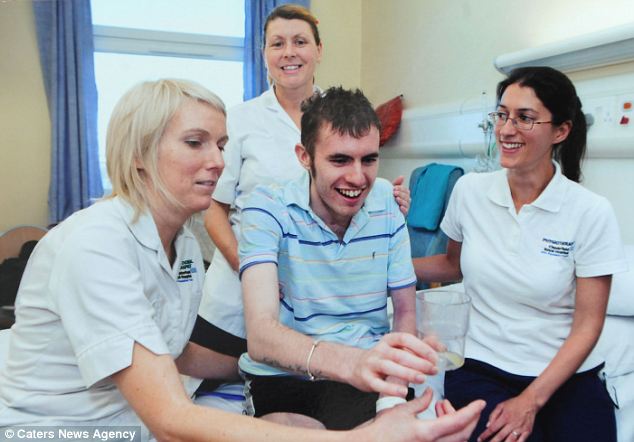 Mark Ellis with nursing staff. He was the youngest stroke patient in the hospital

Amy said: ‘By then, Lola-Rose had started blabbering and making lots of baby noises.

‘Mark’s therapist told him that he should copy her and it might help improve his speech.

‘He started to make the same sounds, and then the words came too. That was while we were still at hospital, and his speech has come on a lot since then, although he is still sometimes hard to understand.

‘Mark left hospital in March 2011, eight months after the stroke and by then he could use a walking frame which was just incredible.

‘He can use his frame to get round and go to the bathroom, and the physiotherapist is positive that he can get Mark walking fully again.’

Mark and Lola both learn to talk by reading Lola’s books together, as well as using speech Apps on the iPhone and iPad.

He has managed his co-ordination by playing games with Lola, now nearly two, and using her toys and the pair spend hours a day learning together. 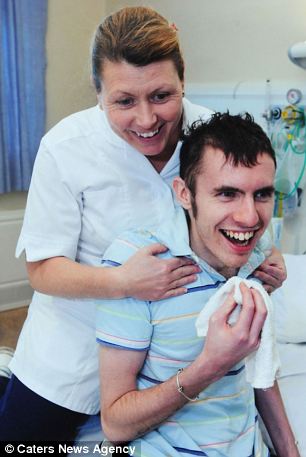 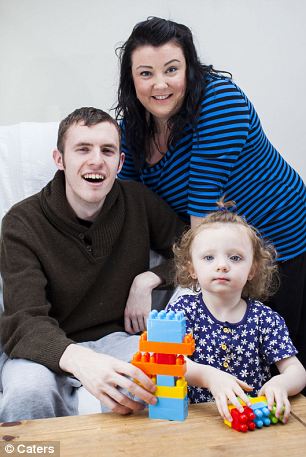 Hope: Mark’s wife Amy and young daughter gave him the focus he needed to get better

Amy, who gave up her job as a hairdresser to be a carer for her husband, said: ‘He held Lola about a month after the stroke happened. We lay her in his arms when he was in bed. They have a strong bond.

‘I was told not to expect anything from Mark after his stroke so I’m overwhelmed by how well he’s done. Anything and everything he does now is just amazing.’

Since the stroke, the family have moved from their house into a bungalow which is easier for Mark to move around in.

Kate Allat, a survivor of locked-in syndrome who established the charity ‘Fighting Strokes’ has been helping the family with Mark’s recovery.

Kate said: ‘Mark and Amy especially, but also the wider family and friends, have been through so much, especially just after the birth of Lola-Rose.

‘I hope Mark continues to stay focused on what he can achieve and fulfils his dream of walking Lola-Rose down the school path.‘

She said: ‘When Mark came to us, he had been diagnosed with locked-in syndrome which meant he could communicate by blinking, but he couldn’t do anything else.

‘He’s worked extensively and gradually learnt to walk, eat, talk, and wash himself by the time he left us. He needed to work a bit on his speech although he could speak.

‘We have 400 – 500 people who have had a stroke each year, but never had anyone as young with his condition.

‘His determination and having a young baby have sure contributed to his recovery.’

“Father trapped in his own body by ‘locked in syndrome’ learns to walk and talk again after copying his baby daughter. Mail Online. 18 July 2012. Web.