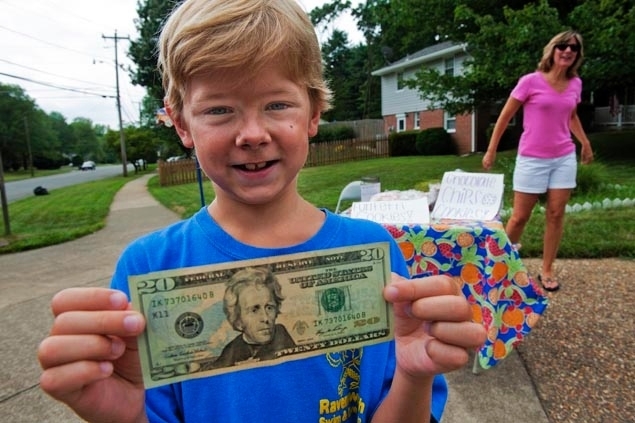 Johnny Karlinchak, 8, demonstrates extraordinary moral fortitude in the face of tragedy, inspires a community
After a 60-foot oak tree fell on his neighbor’s house, eight-year-old Johnny Karlinchak opened a lemonade stand to raise money to help pay for damages. The boy’s goal was to raise his neighbors’ $500 insurance deductible, reports The Washington Post.
Upon seeing the tree that caused $200,000 in damage to the home, this child from Springfield, Va., instantly ran to his piggy bank to gather his life savings: five quarters, which he rushed to give his neighbor Mrs. Elissa Myers.
Myers told The Washington Post that she lost many things in the storm that didn’t make her cry but the “overwhelming kindness of Johnny did.”
Bill O’Leary/The Washington Post/Getty Images Johnny’s kindness is inspiring his neighborhood.
One hour after giving her $1.25, he appeared on the sidewalk with a lemonade stand and a sign that read, “Mrs. Myers building fund.” On his first day he earned $21. A few days later, he went to the lemonade stand again and made $108. Before too long Johnny surpassed his $500 goal. But he told WTOP that he continued raising money nonetheless.
Bill O’Leary/The Washington Post/Getty Images Johnny’s sign: “Mrs. Myers building fund.”
Johnny’s empathy has roots in how his neighborhood rallied behind his family when they experienced tragedy. Four years ago, his 6-year-old sister Kelly died in a car accident. The neighbors subsequently raised $38,000 for a playground in Kelly’s name.
Bill O’Leary/The Washington Post/Getty Images Karlinchak gets his lemonade stand ready.
Just as their kindness inspired Johnny, it looks as if his kindness is inspiring them. His neighbor Marian McLaughlin overpaid for her treats on purpose: “I gave more than enough for my lemonade and two cookies. The other day I did the same.”
“This is a wonderful neighborhood,” she concluded.