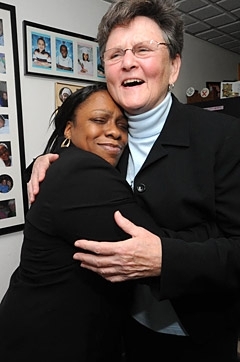 Queens, New York (CNN) — Kellie Phelan doesn’t mince words when she looks back at herself five years ago.
“I was basically a crackhead,” Phelan said. “I literally was getting arrested every other week. I got pregnant by a drug dealer. … I was seven months pregnant, and I was still smoking crack.”
When she finally gave birth to her daughter, Phelan was behind bars, serving a 90-day jail sentence for possessing crack cocaine, violating her probation.
It was a wake-up call.
“That was the most traumatizing experience of my life,” Phelan said. “To go see my beautiful, healthy baby girl in an orange jumpsuit and handcuffs and shackles … I was embarrassed that was the way I brought her into this world.
“I knew I was changing my life. I just didn’t know how I was going to change my life.”
Fortunately, Phelan connected with Hour Children, a nonprofit that reaches out to convicted mothers at five correctional facilities in New York. Now, at 38, she says she is drug-free, has a job she loves and is raising her daughter in an apartment of her own.
“When you see what (these women) can do with support and love and education, it’s miraculous, really,” said Sister Teresa Fitzgerald, who founded Hour Children. “They don’t believe in a future and are hung up on the mistakes of their life. And life is not about a mistake. We all get a gift of life, and we have to live it.”

Spread the love
2012-08-17
Previous Post: 11 yr old tennis player from Liberia gets chance to train in Spain
Next Post: Mayas may have used chocolate as spice