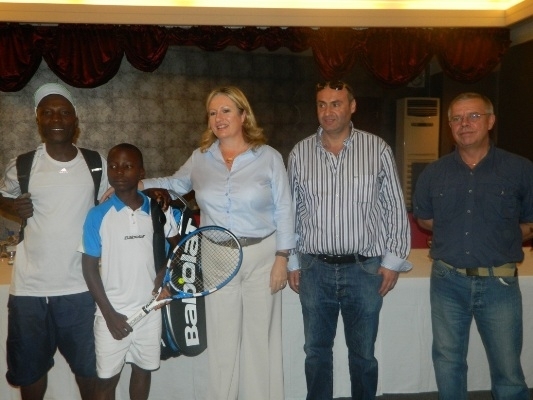 Some say “Luck is when preparation meets opportunity”.  This is definitely the case for 11 year old Alfred Saah Kandakai from Liberia.  The young man played a tennis match against Mr. Tani Hanna, the Chairman of Games World International in Liberia.

Mr. Hanna was surprised at how skillful Saah played for his age and decided to give him an opportunity of a lifetime.  He is sending Saah to Barcelona, Spain to train for three weeks at Sanchez Casal one of the most famous tennis academy’s in the world.  What an opportunity!

Mrs. Anna Bsaibes, a shareholder at the hotel where the lucky match occurred, gave the following statement to frontpageafrica: “We are going to develop this young and talented tennis star’s skills at one of the World best tennis academy in Sanshall Casal in Barcelona where such greats star like Roger Federal, Rafael Nadah and Andy Murray attended“.

How did Saah get so good at tennis?  He accredits that to his father, his present coach, who started a refugee’s tennis academy in 2006.