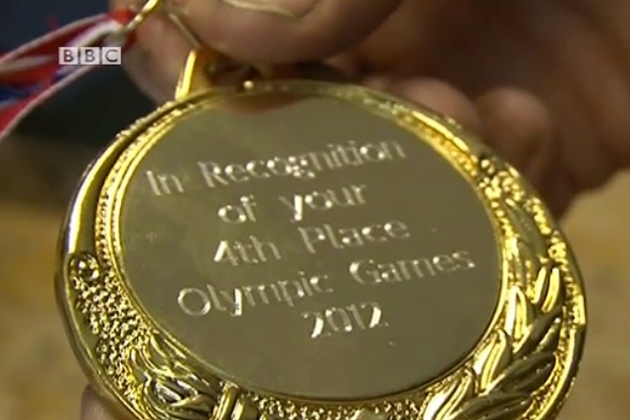 “There used to be 84 countries in the Olympic Games, now there are 204. Performance levels have become so much higher that it is so hard now to get a medal. I thought, it’s time this increase in the competitiveness and the standards was taken account of.”

And with that, David Mitchell from Derbyshire, England decided that the Olympics needed fourth place medals. And he was the guy who was going to make it happen.

So Mitchell went to a local trophy store and spent his own money to have some custom hardware made for the most disappointed of all Olympians. On one side would be the athlete’s name and event and on the other, “In Recognition of your 4th Place Olympic Games 2012.” The first recipients? British divers Peter Waterfield and Tom Daley.

The pair was well on its way to a medal (and possibly even the gold) when they botched their fourth dive. In the end that mistake was enough to knock the duo just off the podium. In a tweet following the match, Daley summed up his feelings:

But before you cry homerism, Mitchell’s not limiting his operation to athletes from the UK. He’s said he plans to send medals to select fourth place finishers from around the world. His only worry?

“I hope they don’t find it insulting, because it’s meant seriously and supportively.”