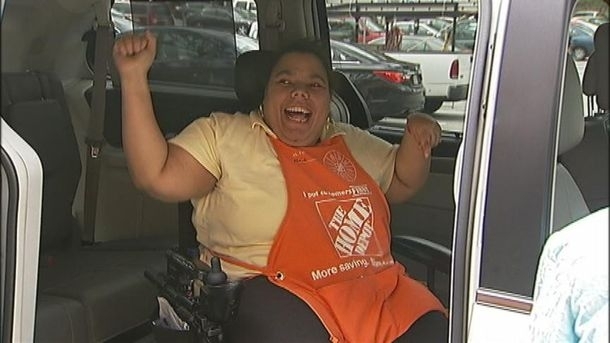 On September 30th, 2012, a $60,000 specialty equipped van was stolen from Alicia Day’s house in Dekalb County, GA.  Alicia is a 24 year old with cerebral palsy who uses a wheel chair for mobility.  Even though she has a disability, she doesn’t let that put her down – She told Alanta’s Channel 2 Action News that she prides herself on trying her best to be independent and working as a part time greeter at Home Depot.

Minutes after the van was reported stolen on the news, Tyler Perry called the news station and said that he wanted to give Alicia Day a brand new van.

Alicia was in shock when she received the phone call with Tyler Perry. “My mouth just dropped to the floor when I heard his voice”, she said.  Alicia’s father was flabbergasted as well when he picked up the phone. He said, “Excuse me, who do you want to talk to? Who is this now?,’ Day’s mother said.

Home Depot stepped it up as well.  They donated $5,000 to help Alicia with medical expenses and she gets to meet the president of Home Depot!