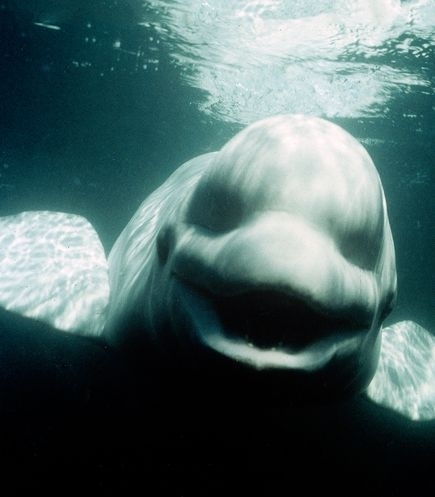 First parrots and now whales?! Be careful what you say around beluga whales – they may say it back to you 🙂

It all started in 1984 at the National Marine Mammal Foundation in San Diego, CA.  A captive whale named “NOC” lived there.  People standing near the whale enclosure started hearing faint conversations, but they didn’t know where they were coming from.  “You could hear there was a conversation, but you couldn’t make out what they were saying,” said Sam Ridgway, a creator of the U.S Navy Marine Mammal Program.

Then a human diver thought someone was telling him to get out of the tank because he kept hearing the word “out”.  “This was very rare, and a first for me,” Ridgway stated.  “The speech-like sounds were several octaves lower in frequency than the whale’s usual sounds,” said Ridgway. His research is just now being released in the journal Current Biology.

Later on the voices stopped.  Researches believe that NOC stopped talking when he reached maturity.

That is really interesting news that another mammal can mimic a humans voice.  Maybe NOC just wanted a friend :).  There are always more secrets to unlock in this world!