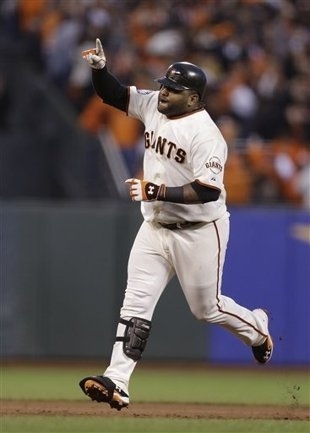 Last night was game 1 of the 2012 World Series between the San Francisco Giants, and the Detroit Tigers. With the Tigers ace Justin Verlander at the mound, everyone expected another dominant complete game out of arguably the best pitcher in baseball. But the Giants Pablo Sandoval had other ideas for the night…Sandoval hit the history books with his 3 homeruns leading the Giants to take the first game of this seven game series 8-3. “Man, I still can’t believe it,” Sandoval said of his performance. “When you’re a little kid, you dream of being in the World Series, but I was thinking of being in this situation, three homers in one game.” 3 homeruns in a World Series game has only been accomplished 3 other times in the history of Major League Baseball. Babe Ruth who did it in 1926 and 1928, Reggie Jackson in 1977 and Albert Pujols last year. Game 2 is set for tonight October 25, and we will all be watching to see how Detroit comes back from a disappointing loss, and how Pablo backs up his historic night.

Spread the love
2012-10-25
Previous Post: Charlotte Bobcats and Miami Heat duke it out in Raleigh
Next Post: Man sells his $4.5 million autograph collection for his daughter