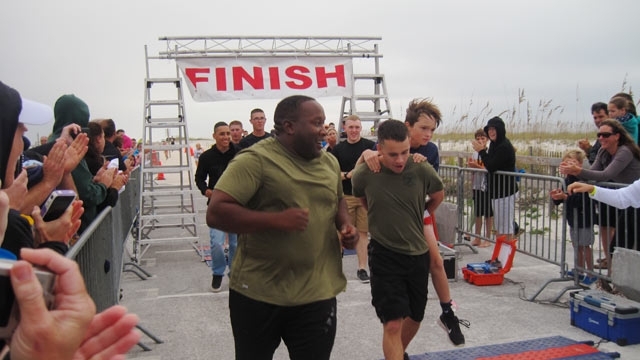 Ben Baltz, a bone cancer survivor, was racing in his third triathlon of the summer.  He was only a half mile away from the finish when he noticed something wrong with his prosthetic leg.

“It [the leg] wobbles,” Baltz told WHP-TV.  While running, the screw came out and Ben fell down.

“I saw Ben fall to the ground,” Pfc. Matthew Morgan, 19, of San Diego, informed the Marine Corps Times. “I made it there first and he had already regained his composure and was trying to fix his leg. I asked if he needed help and he said, ‘No, I just want to finish the race.’”

Pfc. Matthew Morgan knew what he needed to do.  Marines are trained never to leave anyone behind.  He picked Ben up, put him on his back, and started running with a team of Marines.

Captain Frank Anderson, Morgan’s commanding officer, wasn’t surprised by this act.  “We are selfless as an institution in the Marine Corps,” Anderson said. “Putting others before ourselves is second nature.”

Way to go guys!!!  This is some awesome great news 🙂