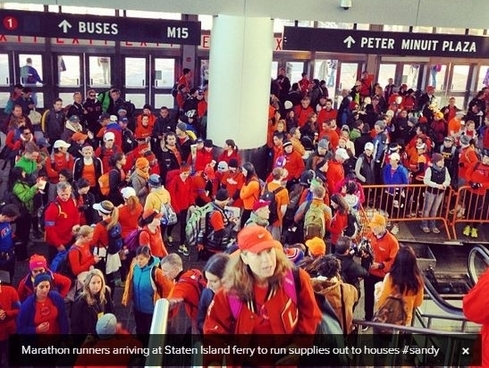 What do 40,000 marathon runners do when their race is cancelled? This was the question that many were asking when the long anticipated NYC marathon was cancelled due to Hurricane Sandy. The hurricane left millions without power and heat during a time of year when the temperature has started dropping.

The race is a big deal for New York City. It brings in $340 million for the city and raises $24 million for charity. The mayor decided to cancel the race to allow the city to concentrate on relief efforts for those affected by the storm. Hundreds of police officers and firefighters which would have been working on closing streets for the marathon can now help the victims.

The runners made the best of the cancellation. Some decided to still run an alternate route. They organized a Facebook page called “Run Anyway NY” to organize a 4 lap run around Central Park which equates to the 26.2 miles! Wow, Central Park is huge :). Other runners decided to volunteer on Staten Island helping victims and cleaning up debris.

Meb Keflezighi, the 2009 marathon champion, stated: “I want to work with somebody. I don’t mind going to Staten Island (which was greatly affected by the storm.) If I cannot run, I want to be positive. Or go to Central Park and let the runners know it’s OK. I don’t know. It’s my first Sunday off in many years. How can I help?”

All of the runners really made a positive impact. The people of NYC and the world will not forget this selfless act. This is without a doubt some GREAT news!