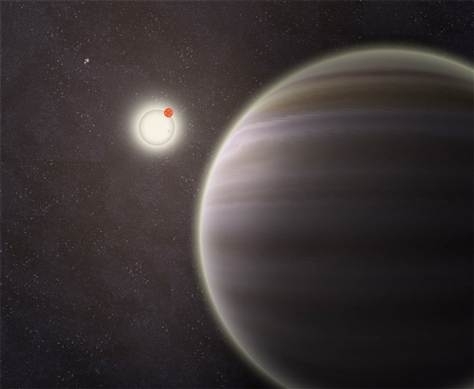 Kian Jek and Robert Gagliano discovered PH1 while participating in the “Planet Hunter” program led by Yale University.  The program allows amateur astronomers team up with professional scientists to search for new discoveries with data collected from NASA’s Kepler space telescope.  “Planet Hunters is a symbiotic project, pairing the discovery power of the people with follow-up by a team of astronomers,” said Debra Fischerv, a Yale astronomy professor who helped launch the project.

PH1, the newly discovered planet is roughly 6.2 times the size of Earth.  What’s amazing about it is that the planet has two suns!!!  On top of that, it is orbited by two more stars!  “This unique system might have been entirely missed if not for the sharp eyes of the public,” said Fischerv.  Only six planets have ever been discovered to have two parent stars.  These types of planets are called “circumbinary planets”.  None of the discoveries have ever had two additional stars!  These circumbinary planets were once only in science fiction, the most popular being the planet “Tatooine”, Luke Skywalker’s home in Star Wars.

“It’s a great honor to be a Planet Hunter, citizen scientist, and work hand in hand with professional astronomers, making a real contribution to science,” Gagliano said.

“It still continues to astonish me how we can detect, let alone glean so much information, about another planet thousands of light-years away just by studying the light from its parent star,” Jek said.