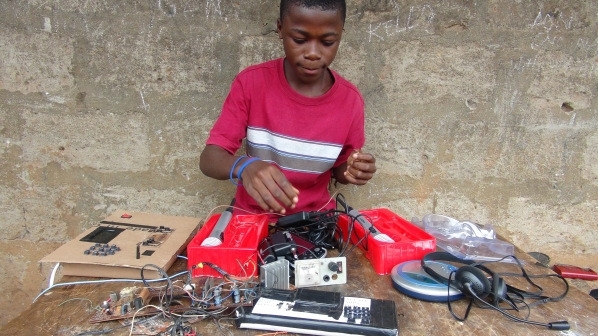 Could Kelvin Doe be the next Tony Stark, aka Ironman?  Kelvin is a 15 year old self taught prodigy from Sierra Leone.

He goes through trash and discarded materials, finds broken parts, and makes his own inventions.  The electrical grid in Sierra Leone can be described as spotty at best so Kelvin created his own solution.  He made his own battery and created a generator from scrap materials.  Then he created an FM transmitter to broadcast his own radio show.  DJ Focus is what he calls himself on his now successful radio show.

“People normally call me DJ Focus in my community because I believe if you focus you can do an invention perfectly.” Kevin states. “I DJ every day”.

David Sengeh runs a summer innovation camp in Sierra Leone.  This is where he first met Kelvin.  “People listen religiously to his radio station”, Sengeh states.  He was impressed with Kelvin and arranged for the 15 year old to visit the Massachusetts Institute of Technology as a guest resident for 3 weeks.  Sengeh wants to see more Kelvins and to start a movement for youths.

With David’s help, Kelvin got to spend countless hours in the labs at M.I.T where he had the opportunity to get help from other students and improve his inventions.  At M.I.T, Kelvin had access to all the electronics that he needed.  “Whatever I have learned here, I will share it with my friends, colleagues, and loved ones and do it as a team” Kevin says.

He was eager to get back to his family and his home country.  He was very grateful for the opportunity, but he definitely missed his family and the food in Sierra Leone.

Kelvin keeps moving forward to improve his skills and help his country.  “My next invention will be a windmill for people to use for electricity”, Kevin says confidently 🙂

Watch the video – it’s really an inspirational story.  Everyone can help inspiring youths by sharing the video and helping out non-profits that help youths!