67 years after he wrote it, Army Colonel’s symphony gets standing ovation 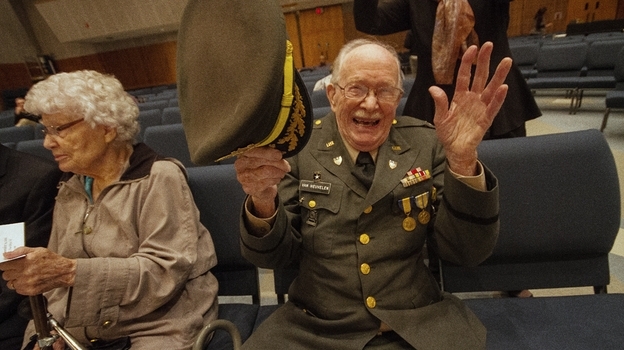 Retired army colonel, Harold Van Heuvelen, 93, has quite a beautiful story.  How many people do you know that have created a beautiful symphony?

Here’s his story.  He was in World War II and had a lot of free time after peace came in April of 1945.

“We just practically sat there without anything to do,” Heuvelen said in an interview with NPR. “So I decided to write a symphony.”  He called the symphony “Opus 7”.

Heuvelen was no stranger to musical art.  He previously studied under the composer Leonard Bernstein at the Tanglewood music academy in Lennox, Mass.

The symphony embodied all of the emotions he felt during the war.
“The opening bars of the first movement portray the depth of sadness experienced in those years prior to World War II,” Heuvelen stated.

The beautiful symphony lay dormant for almost 70 years until Harold’s son, Bob Van Heuvelen found it and sent it to the chairman of the Armed Services Committee to get it played.

The symphony was finally played in 2012 by the army orchestra and received a standing ovation to the large crowd!

Harold Van Heuvelen addressed the moved crowd afterwards – “Thank you for coming, and God bless you. And I hope that God will bless you as much as he’s blessed me,”.