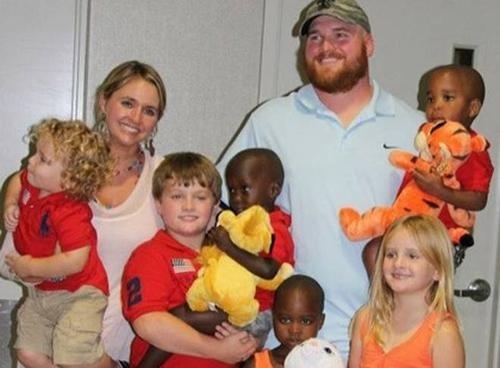 Scott Wells, the 300 pound starting center for the St. Louis Rams, and his wife Julie have always wanted to have a large family.  It was a long bumpy road, but they are so happy to have doubled their family with the addition of three children from Uganda!

Scott and Julie, former high school sweethearts, had their first son in 2003.  Julie was pregnant with twins in 2005, but unfortunately lost them both.  The Wells’ were heartbroken, but did not give up on having kids.  They had a daughter the next year and a son shortly after.

They still wanted to add more to their mini football team so they looked into adoption.  They picked Uganda, a country in East Africa, as the location.  The adoption agency found a perfect match – two boys the age of two.  Scott and Julie were excited!  Then the agency called back and said that one of the boys had a five year old sister….could they adopt her also?  They happily said yes.

“We weren’t going to split up [the siblings]. We already knew there was a huge orphans crisis. Our daughter wanted a sister. Again, this is where God was leading us,” said Scott. “And, by this point, what’s the difference between five kids or six? You’re playing zone defense anyway.”

Scott and Julie had a bit of a culture shock when they arrived in Uganda.  I’m sure the Ugandans did as well when they saw the 300 pound NFL football player with shaved head and tattoos!

After a 10 week process, it worked out – They added three more children to the family!

Scott and Julie, Good World News congratulates you on the beautiful family!