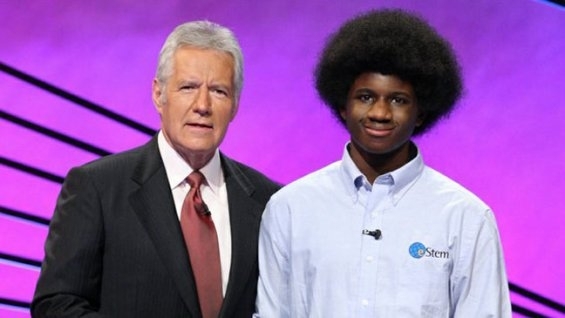 Leonard Cooper, won the ‘Teen Jeopardy’ tournament this week with a $37,000 score and a $75,000 toal for first place.  It wasn’t just the impressive amount of money that he came away with, or the even cooler afro that he was sporting, but it was his answer to final Jeopardy that received mass attention.

Closing out the second round, Leonard made a clutch daily double where he risked his $18,000 doubled it!  The final Jeopardy category was “Military Men”.  The answer was “On June 6, 1944, he said, ‘The eyes of the world are upon you.'” The question was: “Who is Dwight D. Eisenhower?”.

He received an hilarious uproar from the crowd and a huge laugh and smile from host Alex Trebek!

“One of the things I love about this teen tournament is these guys have marvelous senses of humor!”, Alex Trebek exclaimed 🙂

Watch the video below:

Spread the love
2013-02-15
Previous Post: Child teaches the world how to be positive
Next Post: Homeless man returns diamond ring accidentally dropped in his cup and receives surprise reward