By: The Good World News Team
In: Business
Tagged: Indiana, pay it forward 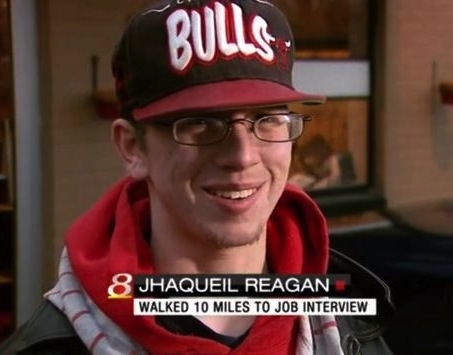 Jhaqueil Reagan, an unemployed 18 year old, was walking outside in the freezing cold to a job interview in Indianapolis, Indiana.  He saw Art Bouvier, who was spreading salt on the iced pathway in front of his Cajun restaurant, Papa Roux, and asked him how far it was to his destination.  Art said it was about seven miles and he should definitely take the bus.  Jhaqueil said “thank you” and continued walking.

Later on, Art was driving with his wife and they saw Jhaqueil still walking on the long journey to his interview.  Art stopped the car and told Jhaqueil that he would drive him.

Jhaqueil told the couple that he was on the way to an interview at a thrift shop and that he could not afford the bus ride.  He said his mother passed away and he was left to take care of his two younger siblings.

After hearing the story and understanding Jhaqueil’s work ethic, Art offered him a job at his restaurant and said he would double the kid’s salary if he gets the thrift shop job!

Art posted the story on his Facebook page and the story went viral with over 15,000 likes!!  The local public transportation company, IndyGo, saw the story and gave Jhaqueil a free one-year pass!!