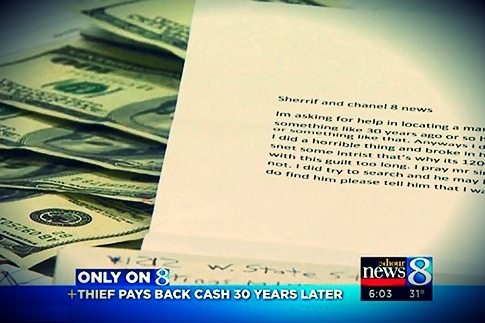 30 years after the crime was committed, a burglar has returned the stolen cash with interest!  The crime happened at the Middle Mart in Barry County, Michigan.  The store does not exist anymore, so the former thief sent the money to the local police with an anonymous letter.

The letter stated, “I’m asking for help in locating a man that I owe the money… I can’t begin to say how sorry iam but have lived with this guilt too long.  If you do find him (the owner), please tell him that I was afoolish stupid man when I did that and iam sorrie.”

Inside an attached envelope was twelve $100 bills.  The thief originally stole $800, but stated the the extra $400 is interest.

The police were able to find the original store owner and returned the money!