Man with brain cancer gets first place in marathon 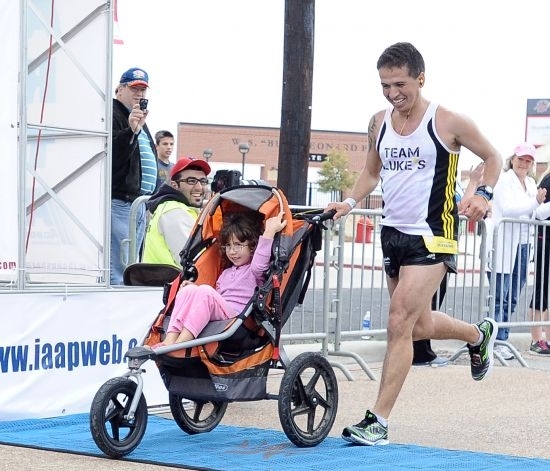 Not only did Iram Leon win the 2013 Gusher marathon, but he did it while pushing his 6 year old daughter, Kiana!

Iram is 32 years old and the doctors have said that he will live to be 40 if he’s lucky.  Iram is not letting brain cancer slow him down at all.  He ran the 26.2 miles in 3 hours and 7 minutes.  He’s not only a great inspiration to his daughter, but also to the entire world, proving that you should never give up on anything.

“People shouldn’t wait to live until they’re told they’re dying,” Leon said. “Go home and hug somebody and don’t wait to be told you have a disease that’s going to kill you. I ran my entire life and I was dumb enough to wait until I was told I was dying before I ran with my daughter.”

He’s making up for it though.  His daughter absolutely LOVES running with her father.  She yells out “WOOO!” on all of the turns with a big smile on her face.  Now it that’s not inspiration, I don’t know what is 🙂