It Took Passion, Hunger and Drive – One Man’s Inspirational Story 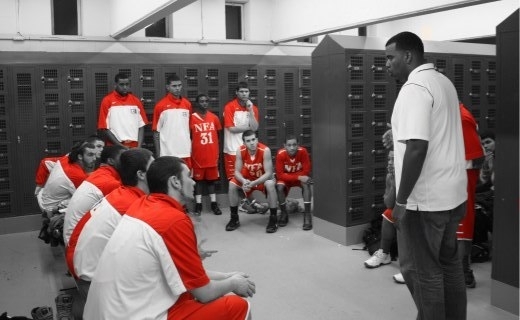 Malik Champlain was born March 23, 1985 in Brooklyn, NYC. His mother raised him with no father in the picture. Growing up, Malik had speaking problems which hindered him from speaking his first words until he was 4 years old. To make things worse, he found out he had hearing problems which lead to his stuttering issues. Eventually he received hearing tubes when he was 7 years old to help with the hearing. The summer before high school, Malik had to read out loud to himself the book Goosebumps for hours, until he spoke without stuttering… “It was one of my greatest accomplishments” Malik told me. He still stutters when extremely nervous or excited but he’s learned to mask it by snapping his fingers or slapping his leg to get him through his words.

Growing up in tough neighborhoods in Brooklyn and then in Connecticut, he always loved sports but his mother wouldn’t let him leave the front steps because of the unpredictable nature of the streets. Eventually his family moved to the good part of town and he was able to ride his bike. Malik still couldn’t play sports in high school because he had to babysit his siblings. Malik finally went out for the basketball team without his mother’s permission in 10th grade, but got cut…The coach said he wasn’t good enough and out of shape. In 11th grade Malik’s mother finally gave permission to play sports. He worked extremely hard on his game and getting in shape to prove everyone wrong about him. He made the basketball team, got into the varsity rotation, and also started as a midfielder playing lacrosse. His good senior year season for basketball got him recruited by Western New England College (WNEC) where he attended in the fall.

At WNEC he played basketball for four years, and was a captain for two years. His team won the GNAC league title his senior year, ECAC championship, and posted the second highest win total in school history with 22 wins. Malik and his mother still stressed the importance of being a Student first before an athlete.

Malik Graduated in 2007 with a B.A. in History. He worked and Coached at Norwich Free Academy in Norwich, CT and received the NAACP Community Service Award, 2009 for his work in the community speaking to high school students at the NAACP events, establishing community events, and bringing attention to achievement gaps and poverty in the city.

For the majority of 2009 -2010 Malik ran into hard times and became unemployed and homeless.  He resorted to living out of his car trying to survive and finish
his master’s at Sacred Heart University. With only $400 in his savings and a half tank of gas, he went to his first interview, got the job on the spot and began working a couple of days later. “Everything I owned was in my 1998 Camry with 215,000 on it. I slept at the YMCA parking lot, or paid $5 to sleep at the T stop in Somerville. I worked for $350 a week for about 3 weeks then found a room for share on Craigslist.”

In March of 2011 Malik’s former College Coach Mike Theulen offered him a position as head assistant coach at Western New England University. Malik moved back to Springfield, MA and in 2012-2013 bought a house, got married, and started his motivational speaking engagements in CT, MA, NY, and now GA. Malik has done motivational speaking for college and high school sports teams, staffs at schools and business, as well as informative speeches at Domestic Violence rallies and Black and Latino male forums.

“The highest of distinctions is service to others and that is what I’m doing now giving back not only to my community but the ones around me. Trying to spread my message that “tough times don’t last though people do” and that “Greatness is in everyone, we just have to be willing to dig deep enough and look hard enough for it, it won’t come easy, you got to be willing to pay the price for success. You got to fight through the pain, believe in yourself when no one does because there is a reward at the end, you got to stand through the rain in order to see the rainbow.”

I had the pleasure of playing on the same basketball team with Malik in college, and couldn’t be more proud of where he is today with his life. The crazy thing is I never knew about Malik’s upbringing, and the struggles he went through early in his life which shaped him into the man he is today. He’s never been a person to try and use that to make people feel bad for him. He kept that to himself and used it as motivation to accomplish all he has.

The Good World News Team wanted to share this story to let people know that you even when times get tough you must keep working hard and your dreams can come true. Malik, Keep up the Good work in your community and with your team, you are an inspiration to all!

Have a good day, and let the Good News be Yours!