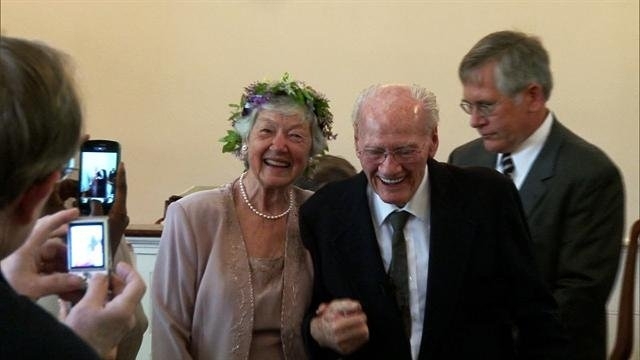 Ever since Howard Attebery, 90, set his eyes on Cynthia Riggs, 81, sixty-three years ago, he knew he was in love.  In fact he never stopped loving her all these years.

As a single man approaching 100 years of age, he decided to send her a cryptic letter that stated “I have never stopped loving you” in code.  As for his return address, he wrote the GPS coordinates.

Cynthia, immediately knew who wrote the message and sought out to find Howard.  When they finally reunited after all these years, Howard did not waste any time.

“I held her hand, and within the hour, I’d proposed to her,” Howard said. “I knew. And she knew.”

The two love birds wed at Martha’s Vineyard.  “He’s a romantic character, and he certainly knew how to win me over.”, Cynthia said.

Spread the love
2013-06-08
Previous Post: Man hitchhikes around the world for free
Next Post: Ancient cave art discovered in Mexico