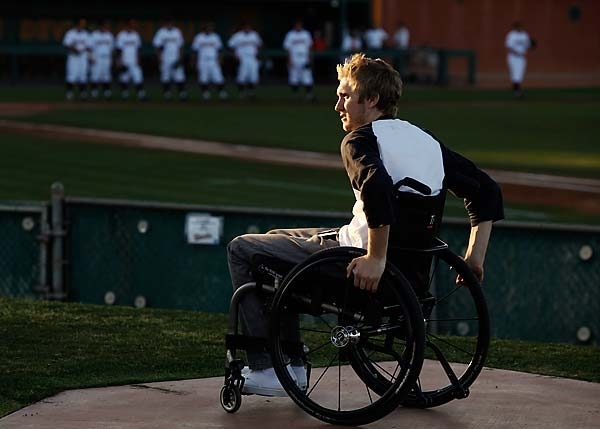 California’s Mr. Baseball for the year of 2010, Cory Hahn was destined to be in the Big Leagues, and to make an impact. After high school, Cory was drafted in the 26th round to the San Diego Padres, but turned that down to play college baseball at Arizona State.

Just 3 games into in college career, Cory slid headfirst into 2nd base and collided with an opponent.  In a freak accident, Cory had broken his neck and doctors told him he was paralyzed from the chest down.  Cory knew his baseball career was over, but he held his head high and pursued a business degree while being the assistant coach for his team.

Being that he was eligible for the MLB draft again because he was 3 years removed from high school, the Arizona Diamondbacks drafted him in the 34th round this past Saturday.  It was also significant because Cory had worn #34 at Arizona State.  Cory’s story is an inspiration to all, and we wanted to congratulate him on being drafted.  What an honor.

Spread the love
2013-06-12
Previous Post: “Have a pint, change the world” at Oregon Public House
Next Post: Police pulls over teen and gives a special gift